US DOLLAR SUMMER Q3 FORECAST PART 1: 8 REASONS TO BE BULLISH

As we enter the heart of Q3, and we’re past the influence of the initial false euphoria over the Spain bank bailout, the heart of earnings season, and Fed Chairman Bernanke’s semi-annual policy testimony behind us, it’s a good time to review the USD’s prospect for the rest of the summer.

As I discuss in depth in my book, The Sensible Guide to Forex, (see link for full description and reviews), one of the key principles of conservative, safer, simpler forex trading or investing is to find long term trends and ride these via a variety of techniques discussed in the book. Because currencies trade in pairs, and because it takes a long time to reverse the economic fundamentals of one nation’s economy vs. another’s, forex markets produce some of the steadiest long term trends of any financial market.

For Longer Term Trades:  Either via directly trading in the pairs themselves or a via variety of indirect investments in these pairs via social trading or standard and binary options for capital gains or steady currency diversified income.

For Longer Term Investments For Capital Gains Or Income: Via a variety of instruments and assets denominated in them like stocks, bonds, and real estate.

So it pays to look at some of the more promising long term forex trends, particularly when they’re relatively young and have just begun to prove themselves from both a technical and fundamental perspective.

THE BULLISH: THE FUNDAMENTAL PERSPECTIVE: FAVORS USD STEADY OR HIGHER

Fundamentals are what drive longer term trends (although there is a degree of interplay between fundamentals and technical factors in the short term.

As we’ve noted in the past, because the EURUSD pair alone accounts for well over 25% of all forex trade, these two most widely held currencies tend to push each other in opposite directions, like children on a seesaw. Think about it. For every 4 Euros bought or sold, over one USD is sold or bought.

So, any weakness in one of these two grants considerable strength to the other, and vice versa.

For the coming months, the EU and EUR are likely to continue to deteriorate.

Shortly after the Spain bank bailout was announced, while most pundits were wetting themselves with excitement over it, we warned that markets would soon realize that nothing had changed. In particular, it had all the flaws of past failed attempts to stem the crisis:

Yet even if we assume Spain and Italy defaults can be prevented, it’s unclear how the EUR can avoid continued weakness.

Given the above, the EU is providing an ongoing dual support for the USD:

For a summary of the 5 reasons the EU still looks doomed, see here.

The pullback in virtually all major economies favors safe haven currencies like the USD.

With virtually all major central banks in neutral or easing mode in response to the global economic slowdown, the USD might not suffer much from further stimulus.

The central banks in charge of the other two primary safe haven currencies, the JPY and CHF, are both actively engaged in suppressing the value of their currencies in order to stimulate their exports. Thus in a time that favors safe haven currencies, the USD has less competition and is in an overall multi-month uptrend vs. the CHF despite Switzerland’s healthier economy and lower debt levels, and vs. the JPY despite Japan’s better balance of payments and higher household savings rate.

For a variety of reasons, we believe the Fed will refrain from significant new stimulus plans that could hurt the USD in Q3. These include:

With virtually all major central banks in neutral or easing mode in response to the global economic slowdown, the USD might not suffer much from further stimulus.

Both central banks are actively working to suppress the value of their currencies in order to protect their more based economies.  That leaves the USD as the only safe haven currency whose central bank isn’t actively trying to suppress its value (although possible future stimulus measures might have the same effect.

In sum, given the above, there’s limited downside to the USD (though its vulnerable to short term pullbacks and another 20% gain vs. the EUR and other risk currencies is quite conceivable as long as the EU continues to fail to stabilize its sovereign debt and banking crisis.

So given the above, it’s not surprising that the USD is to varying degrees in multi-month up-trends vs. all major currencies. 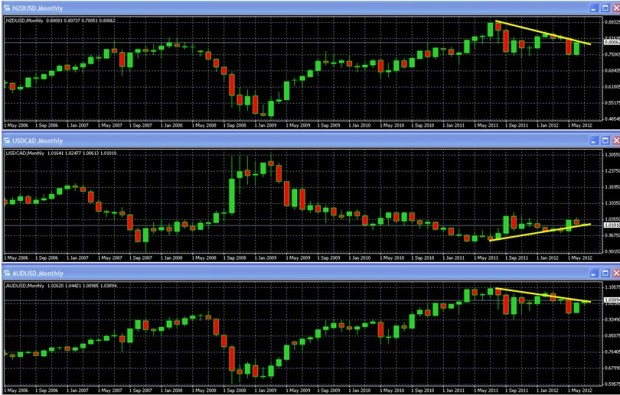 Note for those unfamiliar with reading currency pair charts. They move in the direction of the currency on the left. Thus the falling AUDUSD chart means that the USD is rising vs. the AUD.

In sum, the rest of Q3 is likely to see the USD steady or higher. Until the above fundamentals reverse, the trends are likely to continue.

If the EU blows up, then the USD could well move up sharply.

For the coming months, it’s hard not to be a dollar bull. So what do you do?

Just like any prudent investor diversifies by asset and sector, so too should they diversify their currency exposure. Unfortunately, most investors remain almost completely in assets denominated in their local currency. Given the long term fundamental problems and central bank policies behind the USD ( also EUR, JPY and GBP, to name a few), this is a good time for those overweight in US dollars to formulate a shopping list of non- USD denominated assets.

Then periodically re-make it, and check it twice.

So when the USD’s multi month/year trend fades, you can sell what looks naughty, and buy what looks nice, with relatively strong US dollars. Then ride both assets and the given currency higher.

Proceed to part 2 for a look at the USD bearish forces that could end the USD’s seemingly endless summer.

DISCLOSURE /DISCLAIMER: THE ABOVE IS FOR INFORMATIONAL PURPOSES ONLY, RESPONSIBILITY FOR ALL TRADING DECISIONS LIES SOLELY WITH THE READER. IF WE REALLY KNEW WHAT WOULD HAPPEN, WE WOULDN’T BE TELLING YOU FOR FREE, NOW WOULD WE?

← SORRY MARIO, HERE’S WHY THE EU IS FINISHED
US DOLLAR SUMMER Q3 FORECAST PART 2: 3 REASONS TO BE BEARISH →