A key reminder from Friday for the coming week

Here’s a quick rundown of the likely market movers for the coming week, and a very important lesson from Friday’s price action.

1. Delayed Reaction To Us Jobs Report

While its understood that Asian markets won’t have have a chance to react to the US jobs reports until Monday, at times the weekend produces a new take on the Friday reports in Europe and the US too.

Given the potential influence on the US elections, expect to hear ongoing debate on whether the better than expected unemployment rate was a real or temporary improvement.

Preliminary evidence suggests much of the improvement was the result of a bump in temporary and part-time jobs rather than in ‘real’ jobs that provide both steadier incomes and benefits.

On the other hand, pro-Obama commentators have noted that the pickup in car sales in September implies that the improvement in jobs is real. I’ve a few problems with that idea.

1. The past month’s improvement was not huge, and remains within the upper range of monthly results for 2012, as shown below. 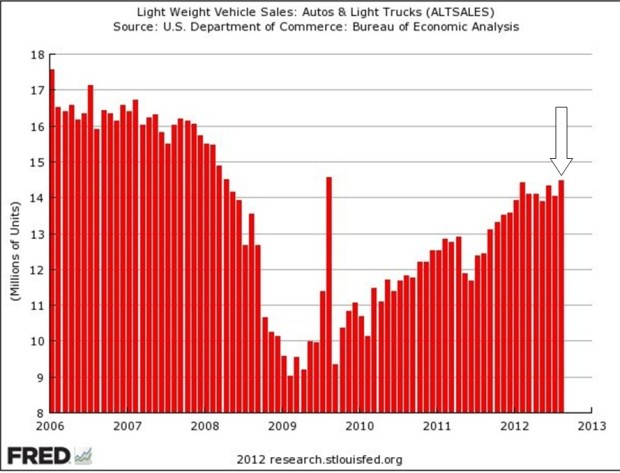 Perhaps the most compelling evidence against this month’s figures indicating a material turnaround in employment comes from those who should know best, the US Federal Reserve. It’s dramatic, unlimited new QE 3 suggests that the central bank remains pessimistic about the US employment situation.

It’s worth noting that while a good jobs report typically is enough to spark a rally, US markets closed essentially flat, because the optimism was negated by a WSJ report that “European Central Bank executive board member, Joerg Asmussen, said it isn’t certain that Greece would receive an aid payment in November.”

This leads us to our next likely market mover to watch next week.

One the one hand there are plenty of reasons to be concerned about near term volatility from EU crisis issues.

–Spain is unlikely to submit to EU conditions until a crisis forces the issue. It had hoped that its recent budget proposal would satisfy the EU and prevent it from demanding more austerity. However the budget appears to be based on growth assumptions that are far too optimistic and have undermined the budget’s credibility with the EU.

–Greece simply isn’t holding to its agreements and wants cash anyway. It claims it will be insolvent by November (and could drag the EU and beyond down with it) if the EU doesn’t pay up.

On the other hand, Per a recent Reuters report, Washington wants quiet in the EU until after the November 6th elections, and EU forbearance with Greek fiscal misbehavior thus far suggests that Obama will probably get it.

However as we note above, that doesn’t mean we can rule out EU drama as a market driver, even if we’re likely to avoid a crisis in the coming month. As we saw Friday, it took nothing more than a comment from a senior EU official to reverse what would have been a rally in US markets Friday.

3. Speculation About US Earnings Season & Reaction To Early Announcements

Recent pessimism has lead to lowered guidance, though these may be just part of the game we’ve seen in the past, when these low-balled estimates are then beaten and the ‘surprise’ provides an excuse for a rally. US earnings season officially kicks off with Alcoa on Tuesday October 9th. Here’s a list of the top names announcing next week.

We want to keep this post short, so just a few brief conclusions to take into the coming week.

Again, the big lesson from the prior week appears to be Friday’s big reminder to us all: that the current EU quiet is deceiving. Just one comment was able to negate a seemingly very positive result from the monthly US jobs report, one of the most important reports of the month.

If Your Assets Are Mostly in USD, EUR, or JPY….

For USD based investors, we got another important reminder on Thursday in an article from Reuters, China mounts challenge to dollar’s hegemony, about the consequences of Fed policy and the importance of diversifying out of USD denominated assets if too much of your wealth is denominated in or linked to it.

For those based in Euros, the situation in the EU, and the ECB’s responses to it (print Euros like crazy, to buy dubious GIIPS bonds, etc) should be reason enough to be concerned that in the best case scenario, the Euro’s long term down trend is likely to continue for the foreseeable future.

While on the topic, what discussion of currencies being debased by unprecedented money printing would be complete without mentioning the JPY? Winner of the award for the most important (and disturbing) article on the Yen in recent weeks goes to Wolf Richter, who recently wrote about Japan’s quiet admission that it too may well default on its debt when the need arises. See here for the full post.

Everyone accepts the need to diversify by asset and sector type, yet few take the needed steps to diversify currency exposure. Yet one can do so without excessive risk or effort.

Today everyone needs to diversify their holdings by currency just as they do by asset and sector type. See here for the best guide to show mainstream lay investors safer, simpler ways to do that than generally available from forex trading or international investing advisors. It’s suitable for both beginners and experienced investors. There’s even a free no obligation course available to help you better assimilate the book’s lessons, courtesy of Caesartrade.com. See here for details.