Longer term the USD outlook remains bullish as long as the Fed continues to appear hawkish relative to the ECB, BoJ, BoE, RBA, and other leading central banks. Belief that the Fed was indeed the only one moving towards a meaningful tightening has been the fuel of the USD rally. Other considerations were short term or minor.

Over the past week, that longer term USD rally has been undermined by a variety of factors, including:

However the biggest two EURUSD drivers of the past week were

In sum, the chances of reducing USD dilutive QE have dropped, and so have the chances for EUR dilutive new ECB stimulus.

In the near term, the EURUSD rally faces strong resistance at the 1.331 area from its 61.8% fib retracement of its decline that began in early 2013, which capped its advance last week. The 38.2% fib retracement markets 1.31 zone remains the likely near term support area, and the 23.6% fib retracement around 1.29690 is the deeper support zone if the pair completely retraces last week’s gains.

Given the light economic calendar, the short term bullish EURUSD momentum and end of week bounce in risk appetite that we saw on the S&P 500 both lend technical support to further moves higher to test the above noted resistance this week. 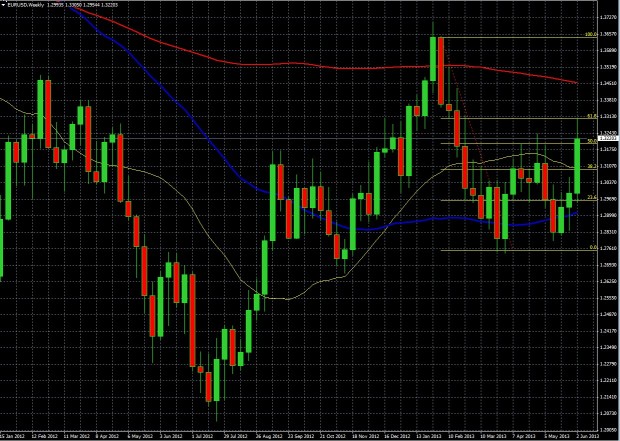 As we noted in our review of last week’s lessons for the coming week, the biggest market driver is sentiment on Fed QE tapering. Given the weak fundamentals in the US, EU, and global economy, markets are depending on continued QE, and any change in that assumption is a game changer, as recent volatility across regions and asset classes shows.

In other words, the big question for the USD (and the EUR too given how the two influence each other) for the coming week is clear: what is the timing and extent of QE tapering, if any?

Therefore the market moving power of any given event or news item is based on how much the event influences perceptions about the answer to that question.

Longer term, as long as the EU continues to contract and the US maintains its slow but steady recovery, then that difference in the performance of these two economies should continue to fuel a longer term EURUSD downtrend.

Longer term, as long as the EU continues to contract and the US maintains its slow but steady recovery, then that difference in the performance of these two economies should continue to fuel a longer term EURUSD downtrend.

That means those with most of their assets denominated in or linked to the EUR, USD, JPY, RBA, GBP and other currencies at risk of debasement need to diversify their currency exposure to hedge that currency risk. See here for an award winning guide on safer, simpler ways to achieve that goal, for both beginners and experienced traders and investors.

← USD Outlook Week of June 3rd: All About Two Big Themes
Lessons For The Coming Week: Focus On Policy – Risks And Opportunities →