The EU’s SRM banking pact to be finalized December 18: new beginning, or beginning of the end?

In our weekly fxempire.com  analysts’ meeting, in which we share thoughts and conclusions about the weekly outlook for global equities, currencies, and commodity markets, we noted that the results for past week’s Euro group and ECOFIN meetings’, which hammered out all but a few final details of the SRM deal,  were far too underreported relative to their importance.

The following is part 3 of a special feature on the coming a single resolution mechanism (SRM – get to know this acronym) for dealing with troubled EU banks.

See part 1 for introduction, background and general themes reflected in the negotiations and terms

See part 2 for summary and analysis of specific key terms, including their risks and dangers

The good: The SRM per the terms in part 2 suggests that the EU will eventually have a degree of centralized supervision and common fund. The current SRM is a substantive step in the right direction.

The Bad: Per those same terms, the SRM sadly reflects the EU’s tradition of too little too late, and risks achieving the opposite of its goal – scaring markets and undermining its credibility. Dangers include:

Inadequate funding, on both the common EU and individual member state level, mean that there won’t be enough cash on hand to reassure markets that  when EU stress test results come out in December, failing banks will not threaten the EU  or financial markets. That brings the following dangers:

Member states that cannot afford it are still responsible to bail out their own troubled banks – doom loop is alive and well in much of the EU.

Equally bad, the ECB will know this, markets will know that the ECB knows it, and will be skeptical about the rigor or honesty of the tests – the EU risks further loss of credibility.

SRM Looks Too Slow, Too Decentralized

The process for failing banks getting needed aid, from bail ins, then national funds, then the EU, looks too slow, bureaucratic, and prone to drawn out conflicts, to respond quickly enough to emergencies to avoid scaring markets, depositors, and lenders.

The new central supervisory body, the European commissions’ resolution board, has only minimal power compared to the committee of member states. Good luck getting a quick decision out of 28 governments.

The goals of the SRM deal were to create a clear, well-funded mechanism for dealing with banks that fail the coming ECB stress tests and future troubled banks. In sum, create a safety net for troubled banks.

In other words, is the SRM likely to break the “doom loop?” Can it end or significantly reduce the threat of insolvent banks to drag down their sovereigns, the EU, and/or global economy and markets?

That is the question.

If the answer is yes, then the SRM would then allow the EU or its members to:

So, does the SRM break or materially weak en the doom loop? Do the terms of the SRM deal as they currently stand, create that safety net that allows the ECB to conduct credible stress tests and allow troubled banks to be recapitalized or closed without rattling confidence in the EU?

To answer that, we have to ask, and answer, the following questions.

The short answer: No. In the next 5 years, it’s very unlikely; after that point, it’s still unlikely. In sum, there are real doubts about whether the cash will be there. This lack of clearly abundant funding alone could be a fatal flaw of the whole SRM and kill the unification movement before it gets going

In the period immediately following the 2014 stress tests (not due to be completed with results published until September 2014) and first few years that follow, the answer is, probably not.

Remember that the common fund is to be built up 10% per year over 10 years, so it will be 5 years before the fund has even half of the 55-70 bln euros, 22-35 bln euros. Given the size of past bank bailout noted in Part 2, that’s probably not enough for even one major national bank rescue deal.

Thus neither individual states nor the common EU SRM fund are likely to have enough cash in the tank when they most need it.

Answer: Probably not. As we saw in part 2, nations must first exhaust both potential bail-in funds totally 8%, then national funds. That pits potentially powerful groups of large depositors and taxpayers (both with allies in their governments) in potentially drawn out fights. After that, there’s the voting process and approval process involving the council of member states and the EU’s resolution board. In short, the current multi-step process looks too slow to respond to emergencies. At minimum, it casts doubt and uncertainty on the EU’s ability to move fast when it must. That means in times of emergencies we’re right back to running to the Troika and Germany.

Answer: It’s very unclear that the weak states and banks that could present systemic risk are any better off. Bail-ins suggest the risk of bank runs and being shut out of bond markets. Using national funds that are inadequate mean they must fund funds elsewhere in their budgets, aka more austerity. Attempting to access EU funds controlled by Germany likely means that even if cash is available, it will come with more austerity demands and/or other conditions that might mean political suicide. That means states are tempted to try the usual brinksmanship. They threaten contagion, in the end agree to harsh terms, ignore them, etc.

Beyond questions about these basic risks and dangers, there are others related to the long period of uncertainty about the test results, stretching from the start of the tests in early 2014, to the expected release of results in September 2014, assuming no delays (?).  That prolonged period of uncertainty carries its own risks and dangers. These include:

Barring a major change in terms on December 18th or thereafter, SRM is too little too late,

Given the likely answers to the above, what can investors do to profit or at least protect ourselves?

In the short term: EU stocks and the Euro are acceptable trading instruments for long or short positions depending on near term technical and fundamental factors. The current uptrend in the EUR and European stocks is a good example of how despite dubious long term fundamentals, they both trend higher on a combination of near term fundamental and technical factors.

In the longer term: The minority of relatively strong banks and sovereign bonds could become highly sought after shelters.

Beyond that, I’m not comfortable recommending long term shorts on peripheral assets, as much as common sense suggests that given the GIIPS dire fundamentals.

The SRM suggests bad choices (punish voters or investors?) and desperate times. Those invite government interventions that are unpredictable. For example:

If bail-ins are a high risk in the GIIPS nations, how do these countries prevent bank runs unless they impose capital controls?

I wish I could be more optimistic. Have I missed something?

Oh, yes. The SRM’s failings suggest that the long term uptrend of the USD vs. the EUR will hold, and that the current EURUSD uptrend is something we watch, wait for it to begin reversing, then short.

That process isn’t happening yet, so continue to respect the bullish EUR trend. Note that our real time sample of retail traders have become more bearish on the EURUSD, (31% long 69% short) than their usual (since November 1st) ~36% long 64% short, probably due to speculation on a fed taper coming sooner. 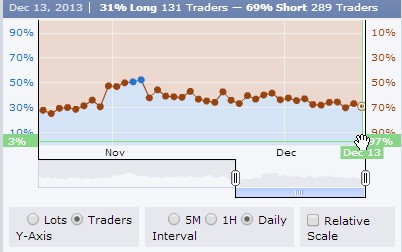