14 market drivers to watch, 2 big fundamental events, something even bigger than Fed taper speculation, and big chance to buy on the dip in a strong uptrend

The following is a partial summary of conclusions from our weekly fxempire.com  analysts’ meeting in which we share thoughts and conclusions about the weekly outlook for global equities, currencies, and commodity markets.

This article focuses on the likely top market drivers for US and global asset markets in the coming week, mostly fundamentals drivers, but also includes an overview of the global technical picture – and a very intriguing setup for US equity bulls who like to buy on the dips within strong entrenched uptrends. The lesson looks like it applies in Asia, though I’m less certain about the resilience of the uptrend for European stocks. See the “Technical Picture” section at the end of this article.

1.     TAPER SPECULATION AHEAD OF FOMC STATEMENT ON WEDNESDAY THE 18th

Yes, yes, the Fed rate statement and press conference is the likely top market mover this week. Surprise (not)!

The FOMC meeting has the most near term market moving potential of any calendar event next week, given that markets have been moving mostly on taper speculation for the past weeks. If the mere rumors were the prime market mover, then the actual news should be bigger, right?

Not necessarily. As always, the impact depends on how much the event surprises markets for good or bad, and thus changes perceptions about various asset values, forcing some assets to rally and others to sell off.

In other words, it’s always all about how much the event surprises markets and changes future expectations.

The degree of ‘surprise’ will depend on how markets interpret both the Fed’s decision and whatever forward guidance it offers. Indeed, a clear statement about future intentions could be more important than any actual choices the Fed announces.

If the Fed doesn’t taper, and there is no clear forward guidance, markets will likely show some kind of relief rally – stocks and other risk assets up, USD down, and so currency hedges and other instruments that tend to move opposite the USD, like gold and the EUR, go up.

If however the Fed signals the taper will start in January, then these moves would be limited or non-existent if the Fed hints that the taper will be small (around 10%, $8.5 bln). Any hint that it will be substantial, or that the Fed intends to increase the pace of the taper, would produce the opposite effect, with the USD soaring, and stocks diving.

We strongly suspect, as noted in the past here, that they will want to preserve Ms. Yellin’s freedom of action. Thus the likely response is either to do nothing and say that they’ll decide depending on more data – OR, to announce a very small token taper, with the proviso that they could alter the pace or halt the taper depending on how US data plays out.

In sum, we don’t see the FOMC meeting and press conference generating huge market moves. If anything, we expect the usual subdued price action or mild sell offs early in the week that so often proceed major risk events.

That said the FOMC meeting has the most market moving potential, in the near term, of any scheduled event next week, given how mere rumor and speculation on the taper have been the prime market driver in recent weeks.

Other Fed action next week includes an expected confirmation of Janet Yellin as new Fed Chairwoman/person. It’s expected, so we don’t expect any price movement unless she isn’t approved, or says something very surprising in her acceptance comments.

2.     THE REAL TOP STORY THIS WEEK: EU FINALIZING SRM DEAL – SO MUCH AT STAKE

As we discussed in depth in our 3 part series just posted Sunday, the actual biggest story with the most overall market moving potential is the coming week’s attempt in the EU to finalize the single resolution mechanism (SRM – get to know this acronym), a detailed plan for how to deal with and fund troubled EU banks (see December’s Real Top Event – By Far – Happens This Week: Part 1, and introduction with key background and themes for those not familiar with it, and it has links to Part 2 (key terms with commentary) and Part 3 (summary and conclusions).

I spent most of last week researching and thinking about this one, because the issue is complex and has many moving parts. Yet through all that, one sees the same themes and behavior patterns that have dogged the EU crisis coming through yet again.

Why is this such a big deal?

Nothing has been fixed in the EU. Since the summer of 2012, quiet has been maintained by a combination of lending money to the insolvent in order to delay the ultimate day of reckoning, sheer spin control, and pressure to keep quiet during US and German elections.

The SRM is the EU’s first real attempt to begin fixing its banking system so that insolvent banks can no longer threaten to drag down entire nations, banking systems, and perhaps the EU, along with them. Remember that EU members don’t have the very useful option of printing money in emergencies. So EU sovereign states and their banks are much more likely to become insolvent as long as there remains no reliable emergency lender of last resort that has the cash and can deploy it quickly enough to prevent a single bank insolvency from spreading doubt about other banks, which in turn casts doubt on other banks and the loss of confidence, and credit, spreads like a plague (hence the term “contagion risk”).

The goal of the SRM is, in theory, to provide both:

Before the Brussels takes responsibility for EU banks, the ECB must first do a rigorous stress test to uncover any bad banks before they get stuck with the cleanup bill.

Before there can be any stress tests, there must first be both a clear plan backed by a fund large enough to easily cover the costs of recapitalizing or closing banks that fail the stress tests. The SRM is to provide that plan and funding.

If there is no well-planned and well-funded SRM, there can’t be any CREDIBLE, RIGOROUS bank stress tests, because uncovering bad banks without a safety net would only risk inviting a new EU crisis. This is the precise reason that past EU bank stress tests were widely suspected of being mere PR exercises. They were then proven to be when banks that passed the test failed with months and brought new bank bailouts. For example, Dexia, Bankia, and Liaki banks all passed the last tests in 2011. See Part 1 of our full special feature for details).

The EU again loses credibility by showing it can’t deal with fundamental, existential threats and reforms. Unlike Washington or Japan, which have had their issues too, the EU doesn’t have the luxury of time that a functioning, integrated banking and financial system provide.

That disappointment might prompt a brief selloff, but EU goofs don’t pack much surprise power, and markets are accustomed to not seeing substantive action until crises hit.

At some point we get a new EU crisis. Markets have become inured to them and so they are no longer as quick to sell off. But if too-big-to-fail-or-bail nations like Spain or Italy hit a banking crisis that threatens their own solvency, then it’s either financial collapse in the EU or lots of money printing.

Other than the above events, there are some other schedule events that might move markets. These include:

14. TECHNICAL PICTURE: An Ideal Buy Point For US Equities Bulls

Here’s our sample of weekly charts from 9 leading US, European, and Asian indexes, which we use to get an overall picture of stock and risk appetite trends. The S&P 500 chart has a variety of additional indicators: 10-200 week EMAs, double Bollinger bands, to help us use it as an overall market barometer. 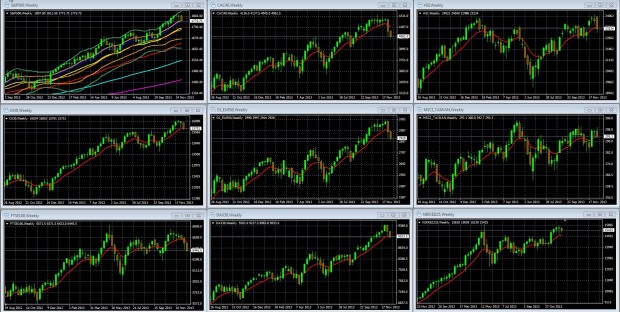 Commentary On Those Charts

Everything pulling back, supposedly on fears of an early fed taper, or guidance on one, removes what’s believed to be the primary driver of the rally in stocks and other risk assets. Europe began pulling back a week earlier than the US.

Looking at the S&P 500 chart, we note that the US stopped rising 4 weeks ago and flashed 2 straight weeks of doji shape candles prior to this week’s pullback, reflecting indecision. That said, the pullback in the S&P 500 is only to its 10 week support around 1770. That’s just a normal pullback within an overall uptrend, and it remains within the buy zone (upper quarter) of its double Bollinger bands, which tells us the upward momentum is still there. If the balance of your evidence suggests that the rally is intact,(and mine does) this 1770 area is an excellent entry point for new long positions (aka a buy point) as the index has pulled back to the bottom of its buy zone but not broken below it.

Your entry risk here is low because if price breaks below this support area (comprised of the bottom of the double Bollinger band buy zone (top orange line) and the 10 week EMA (blue), then you know support has not held and you can exit with a very small loss because you entered near or at this support.

For a comprehensive, clear introduction to risk management tools such as identifying low risk entry points, see my book, chapters 3-5 for the basics of technical analysis and risk and money management (RAMM), and chapter 7 for trade examples that demonstrate how we apply these principles to keep losses low relative to our gains, so that we can be very profitable with a winning trade percentage of under 50%.

If you’re not familiar with how to apply and interpret double Bollinger bands, see: 4 RULES FOR USING THE MOST USEFUL TECHNICAL INDICATOR, DOUBLE BOLLINGER BANDS.

For those seeking a lighter introduction to technical analysis, currencies and to how to build currency-diversified income streams, here’s something for you too.

For the second time since its publishing, I’m proud to announce a new introduction to forex video course, this one just released by FX Academy, based in part on my award winning book.

It’s still being offered for free during the launch period. So if you ever wanted a simple no cost video intro to forex, this is your chance. See here for details.