LESSONS FOR THE COMING WEEK: A NEW RECESSION INDICATOR?

The following is a partial summary of the conclusions from the fxempire.com  weekly analysts’ meeting in which we share thoughts about what’s driving major global asset markets.

Despite the vacation week, there were still some lessons for this week to note.

The Rally In Risk Assets Continues

Jeffries’ David Zervos exemplifies the current bullish outlook. In a note out this week, he writes: “It’s time to go fully risk on and dump the hedge!! And what better way to play for a Fed induced liquidity blow-off bubble top than with one of the original bubble babies of the past – QQQ’s. We are still a long way from the peaks of 13 years ago!! It’s finally time for “Spoos and Q’s.”

So if risk assets like stocks are rising, no surprise that…..

Meanwhile, prices fell this week for the classic safe haven asset and bond rate benchmark, the US 10 year note.

With that price drop, the 10-year Treasury yield broke through 3% and touched a 2-1/2 year high.

One of the most important questions of 2014 is whether the Fed can taper and keep rates from spiking. There’s no cause for alarm yet, as the consensus has been that the yield on the 10 year note would break through 3%. Per a recent Bloomberg survey, those yields are expected to hit 3.41%.

Inflation Coming? Depends On How Much Excess Capacity You See

Cullen Roche wrote observed recently that the Wall Street consensus for 2014 is 2.2%, not high but nonetheless a jump up from the current 1.2%. Their justifications include:

The Anti-Inflation Argument:  Essentially The Opposite Of The Above

“Judging the amount of slack in the labor market requires looking at both the structural damage to the market and the amount of hidden unemployment. A reasonable weighing of the evidence suggests there is still anywhere from 1pp to 2.5pp of slack in the labor market. The pockets of wage pressure are just that: labor compensation is weak by almost any measure. Moreover, even if wages do inch higher, we are a long way from the normal 3 or 4% rate that could start to create serious pricing pressure.”

Overall purchasing managers’ surveys were positive, with only a few out of 22 reporting sub -50 (contraction) figures, and 15 out of the 22 had increases.

Big Winners: South Korea’s PMI figure hit a 7 month high, and Indonesia and Vietnam’s made their largest gains since April 2011. Even Greece, one of the two countries that printed a PMI below 50, hit its highest level in more than four years. US manufacturing PMI continued marching higher to 55 from 54.7 in November, the 4 consecutive rise.

The most notable disappointments were France, which hit a 7 month low of 47, and Australia, unchanged at 47.6. Given the ongoing travails in Europe (as we discussed this week here and here) and that France is the #2 economy in the EU, France is the big concern.

According to the National Bureau of Economic Research (NBER) the Great Recession began in December of 2007, and technically ended in June 2009, (per the two consecutive quarters of declining GDP definition).

However most of us would agree that while there are signs of recovery, it’s far from over. As per Wikipedia here,

The recovery since 2009 has been weak and both GDP and job growth remain erratic and uneven. Unemployment as of November 2013 was 7%, considered high by American standards, with about 7.4 million jobs created since February 2010. American household wealth has plunged to levels not seen since 1992, with incomes dropping to 1996 levels when adjusted for inflation. Nearly 50 million Americans (16%) are in poverty, up from 12.1% in 2007.

If you think the Great recession is really over, consider the following highly unscientific yet intriguing indicator.

Legal pot sales began in Colorado this past week, a little over 5 years since the start of the Great Recession.

The era of Prohibition against alcohol ended December 5, 1933, with the US still deeply mired in the Great Depression that began a little over 4 years earlier, as marked by the stock market crash of October 29 1929 and would last for about another 10 years.

Do we have a historical parallel? Is there a connection between hard times, states desperate for revenues, citizens seeking an easy, relatively inexpensive escape, and liberalization of prohibitions on easily taxable recreational drugs?

Colorado pot sales come with a 25% state tax on top of the usual sales tax of 2.9%. The state expects to sell $578 million worth of marijuana products and generate some $67 million in tax, with $27.5 million designated for school construction.

Washington State too will begin its own legal pot sales later this year. 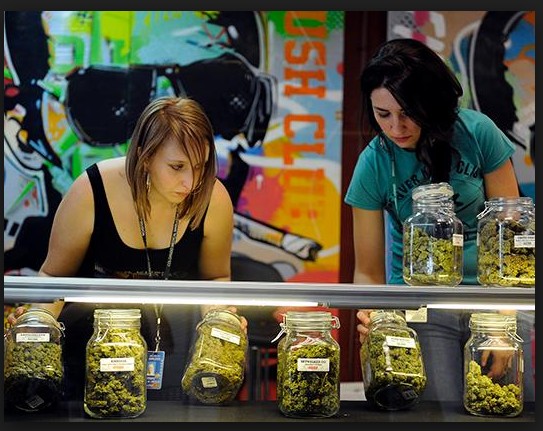 We’ll skip the technical indicators from last week – vacation week price action is not that relevant.