How bullish and bearish forces align for stock indexes, forex and other global markets, both technical and fundamental outlooks, likely top market movers

–Technical Outlook: Strong support is tested and holds, as does upward momentum.

–Fundamental Outlook: Why stocks continue drifting higher, falling US rates are arguably the biggest lesson of 2014?

–Concluding Thoughts: Ukraine, and what US data needs to show us.

Lessons For The Coming Week

Except for the UK’s FSTE 100, all of the leading global indexes in our sample closed the week modestly higher due to a combination of technical factors, anticipated stimulus, and economic data that was mixed but good enough to allow the upward momentum (where it existed, the US, Europe, and Taiwan) to continue.

Fundamentals: Data and earnings that weren’t bad enough to interfere with the inertia of the prevailing uptrend on the weekly index charts. In particular:

We look at the technical picture first for a number of reasons, including:

Chart Don’t Lie: Dramatic headlines and dominant news themes don’t necessarily move markets. Price action is critical for understanding what events and developments are  and are not actually driving markets. There’s nothing like flat or trendless price action to tell you to discount seemingly dramatic headlines – or to get you thinking about why a given risk is not being priced in 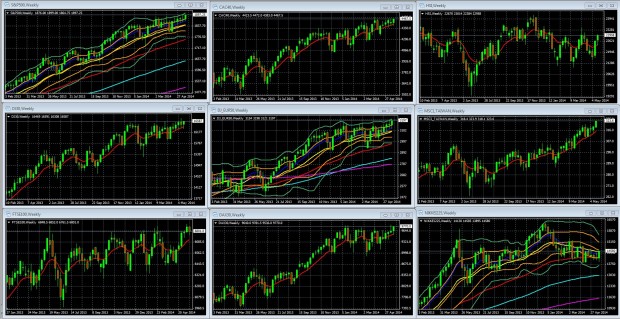 The uptrend in European and US indexes, which looked threatened last week, lives to see another week:

Our sample of Asian indexes were also all higher on the week, though they continue to present a mixture of up, down, and sideways trends that defy generalizations about the region.

Last week I noted that the week’s scheduled economic calendar events were unlikely to provide much in the way of new, lessons or market moving events. That proved true. The biggest lesson was from non-calendar events.

The biggest lesson of the week, arguably of the year thus far, is the shift in US interest rate expectations. This is huge, because it affects almost all major global markets and asset classes.

First, look what’s been happening to yields on the benchmark 10 year US Treasury Notes.

Despite the presumed recovery that is supposed to bring higher rates, they’ve been falling, especially recently. Why, and why the recent sudden dive?

Here are the most likely reasons, each of which we cover in detail in our special report here (highly recommended):

One big obvious lesson we’d mention here is that with the ECB and BoJ still in easing mode, and now the Fed looking like its holding rates down far beyond the previously expected mid-2015 deadline, central bank policy remains very supportive for risk assets.

Risk asset markets have been rising for years despite tepid growth, on nothing more than low rates and the absence of new contagion threats. As the above charts suggest, despite indexes being at or near highs, there’s nothing suggesting a reversal any time soon.

Falling US yields along with improving US economic data remind us that contrary to popular belief, interest rates can stay low even in times of expansion. Note how the chart below shows that this isn’t the first recovery that is not accompanied by rising rates.

US Continues To Look Better Than Rest of World

Looking at both recent economic data, as well as longer term structural challenges, the US continues to look better than the rest of the major economies.

Signs of modestly higher inflation plus a robust jobs market in the U.S continue to contrast with weak growth and employment, and inflation data in the EU.

While China is still growing much faster, it’s slowing, and may not be able to avoid a hard landing. China’s structural challenges include:

Japan? It grew well in Q1 but Abenomics remains very much an experiment in progress, as Japan attempts to somehow keep its borrowing costs down, its trade balance up,  while at the same time devaluing the Yen and keeping its debt/GDP at 200%-plus levels, the highest by far in the developed world.

A cnbc.com article this past week highlighted other reasons for growing US economic advantage. The biggest ones have been:

The weakening US dollar

It notes is down by a third in both real and nominal terms, as reflected by the growing movement of manufacturing back to the US by both US and foreign firms. Although this weakening of the USD has had severe negative implications for USD based investors over the past decades, as we discussed in depth here, it has made US assets and exports more appealing. Feeding into this resurgence of US manufacturing is…

The US Energy Boom

The rebirth of US energy production, as oil and gas fields that were once not worth tapping are now profitable thanks to a combination of higher energy prices and the new technology of hydraulic fracturing, or fracking.

America’s Biggest Growth Story: It’s added up to 50 basis points of growth since 2008, and could potentially to add a further 20 bps through 2020 through lower energy prices, capital investment and jobs. How? By a combination of:

o   Energy intensive manufacturing: The steel, iron, fabricated metals, and machinery manufacturing saw have had real sales grow 17 percent and employment jump by 9.7 percent through 2011 and 2012.

o   Energy infrastructure building of facilities to extract, transport, and store the gas and oil, all of which further feed the demand for the above mentioned steel, fabricated metals and heavy machinery used to make and install extraction facilities, pipelines, storage tanks, rail lines and cars, as well as for building materials and other related products and services. For example, the US has six new liquefied natural gas export terminals in the works.

The EPA’s regulations to cut carbon dioxide(CO2) emissions discourage U.S. coal production, natural gas’ main rival for electric power generation. Combined with overall declining energy consumption in the U.S., coal production has declined 16% since 2008. Gas has overtaken coal as the biggest source of US electric output. That trend will grow. Next month the Obama administration will issue a new set of emissions rules that are likely to put most coal-fired power plants out of business. Of course there is overseas demand for coal, but the loss of US demand, in addition to the added export costs, hurt the coal industry.

So Is California: A Cautionary Tale

As if to remind us that shale oil estimates in the US (and everywhere else) are subject to a number of qualifications.

They can be revised: Big time. This past week estimates of recoverable oil from California’s Monterey formation have been cut by a whopping 96% due to newly recognized difficulties (and thus expenses) extracting the oil. The news represents a loss of as many as 2.8 million jobs and $24.6 bln in tax revenues. Ouch. As always, that estimate is based on current energy prices. Rising energy prices have made fracking worthwhile in the first place, and they may yet rise high enough to make more of California’s oil worth the cost of extraction.

In the absence of major news surprises, key support levels and momentum should again influence where short term moves begin and end, just as they did last week as we described above.

The top scheduled events this week are likely to be the election results for the EU parliament and Ukraine, US durable goods and preliminary GDP. Bank holidays could limit volatility if news is quiet, or exaggerate it if there are material surprises on those days. Top events are in boldface.

No major economic calendar events AND both US and UK have bank holidays.

US Data In Coming Months To Settle The “Weather” Debate

US Q1 preliminary GDP, due out Thursday May 29, is expected to be around -0.5%, due mostly to bad weather. Over the coming months we’ll need to see material improvement. Otherwise, the perception of America’s slow but steady recovery could be replaced by one of “secular stagnation” that was suggested by Lawrence Summers at the November 2013 IMF research conference. As Goldman Sachs’ economist Jan Hatzius wrote in a recent note to clients:

If the US economy cannot accelerate to a clearly above-trend pace even after the end of the private and public sector retrenchment at a time when monetary policy and financial conditions still look very supportive, then it is certainly appropriate to ask whether the forces holding the economy back are deeper and more structural in nature.

Although fighting in Ukraine has intensified, we’ve no indications that anyone is serious about imposing economic sanctions on Russia. For example, the next sanctions up for consideration in the EU involve banning sales of Russian vodka, furs, diamonds, and caviar.