EURUSD Weekly Outlook: What’s Driving The Current Trading Range, What Will Break It

FX Traders’ weekly EURUSD fundamental & technical picture, this week’s market drivers that could change it- the bullish, the bearish and likely EURUSD direction.

Short Term Technical Outlook: Neutral, as downward momentum clashes with strong support at 1.3500. That level is likely to break, see below for whether it’s likely to happen this week.

First we look at overall risk appetite as portrayed by our sample of global indexes, because the EURUSD usually tracks these fairly well, particularly the leading US and European indexes. The main exception to this rule comes when either the Fed or ECB is expected to make a policy change in the near future, because changing interest rate expectations are more influential than overall risk appetite trends.

The short version: The overall risk appetite picture is mixed and thus doesn’t offer any obvious support or hindrance to the EURUSD. 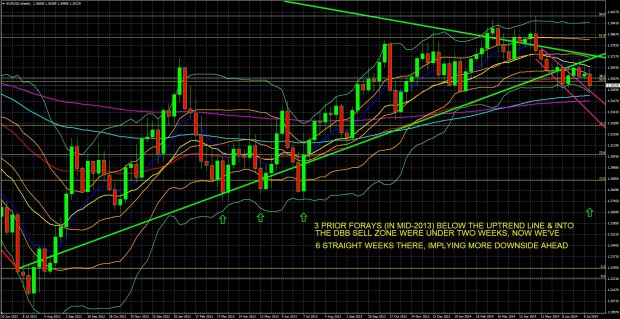 –Until May the pair had been in a steady uptrend since August 2012. The current downtrend that began in mid-May is the longest counter move to that uptrend.

–Since the start of the August 2012 uptrend the pair never dipped below its uptrend line or into the double Bollinger® band (DBB) sell zone more than two weeks. On Friday the pair marked its 6th straight week below that uptrend line AND in the DBB sell zone. Each close in the sell zone implies more downside ahead

–All but the 100 and 200 week EMAs are now trending lower, with the 10 week EMA (blue) already having crossed below the 20 week EMA (yellow), reflecting accelerating longer term downside momentum

That said, the pair has been range-bound for the past 7 weeks, so we’ll likely need some additional fundamental negative to drive the pair below 1.3500, although the deteriorating momentum suggests that a decisive break below 1.3500 is a matter of when, not if.

Meanwhile, any rallies should be capped around the 1.365-1.367 area, given the multiple layers of resistance in that zone, which include:

–The 1.365 level, which has been tested and held as resistance every week for the past 9 weeks

–The mid-2012 uptrend line, which has held for the past 11 weeks, with only very temporary breaches.

Our technical outlook for the coming week and weeks beyond remains bearish, given that the pair remains deeply in its double Bollinger® band sell zone.

Conclusion: Our technical outlook suggests the EURUSD remains with its 1.35-7 trading range, with any breaches of the 1.35 area likely just temporary as long as the above fundamental supports hold. Our directional bias remains bearish. Summer vacation season is a constant damper on volatility that reinforces the current trading range.

The daily chart sends the same message, so no further commentary needed.

The pair’s major moves for the week came in two roughly equal declines Tuesday and Wednesday, after that the pair was virtually unchanged over the final two days of the week.

What were the fundamental drivers behind these moves?

Thus we conclude that the ZEW and Portugal news were the dominant drivers of the Tuesday decline.

In contrast to Tuesday’s action, there was no obvious fundamental driver of Wednesday’s drop.

It was a good day overall for US and European stocks, so risk appetite was actually supportive and thus wasn’t a factor in the decline.

Nor can we point to the leading European or US economic reports of the day, which were more negative for the USD than the EUR.

The most reasonable explanation appears to be more technical than fundamental. Specifically, we’d point to traders’ temptation to test the near term support of the two Fibonacci retracement levels shown above. The breach at around 1.355 opened the way for a test of the 1.3530 level that had capped prior June selloffs. Once again this level held as support, but only to be breached Thursday and then again Friday. A close on Friday below that level would likely confirm 1.3530’s conversion from support to resistance, and open the door for a test of the big 1.3500 level.

Of course, the pair remained within the 1.362 – 1.352 range all week, so any talk of ‘big moves’ remains very relative.  However for future reference it’s worth noting the week’s biggest market movers.

A very brief break below 1.35 got markets and pundits talking about whether this breach was a prelude to a sustained move below this support level.

Barring some very EURUSD-bullish news, we’d expect at least a further test of the 1.35 support area this week. Will this it hold?

In the short term it probably will, both from a technical and fundamental perspective.

Here’s why we don’t think a sustained move below it is coming in the near term and that any breakout below it will be a false breakout.

From a technical perspective, it’s resisted repeated tests, and that track record deserves respect. Remember that over the past eight months, it has been repeatedly tested, but the only breach to last more than a few days came in the wake of a surprise ECB rate cut in November 2013, which only lasted about two weeks. The ECB’s June easing only brought a few days’ breach.

In sum, technically speaking, it’s going to take more than a random technically driven breach to sustain a longer term move below 1.35. Friday’s breach can be brushed off as a temporary technical move.

From a fundamental perspective, as long as the same fundamentals that have propped up the EUR since mid-2012 remain in place, a sustained break that converts this level from support to resistance is unlikely. These include:

What Will Bring The Next Break Below 1.3500 And The Next Sustained EURUSD Downtrend?

A sustained break below 1.3500 is unlikely until one or more of the above 5 supportive fundamentals disappears. Not even the end of QE necessarily means rate hikes are coming per the Fed’s repeated indications.

Conversely, any material strengthening of these fundamental supports could boost the EURUSD to the upper end of its recent range around 1.37, although there’s little indication of that happening.

At most we could see a temporary breach this week if we get some combination of US inflation readings that beat expectations (i.e. are higher than forecasted) and lower than expected euro area flash PMIs. In that case, we could even get a test of the next support level around 1.34.

Beyond monitoring the above fundamental supports for the EURUSD, the other possible drivers from the pair will come from this week’s events, both scheduled economic calendar events and possible surprises from geopolitical tensions.

For now markets remain convinced that neither events in Ukraine or Gaza will materially influence the pair, although the shooting down of the Malaysian Airliner over Ukraine was THE event of the week for stocks, its bearish effects were temporary.

US CPI, HPI. Existing home sales may be a factor too if it packs a material surprise to the upside, as recent housing data has been poor, so another weak or in line report won’t change market perceptions on US housing. A big upside surprise in inflation data could be the big news of the week because it could reignite rate hike speculation and drive the USD higher and the EURUSD lower for a sustained break below 1.35. This is likely the biggest EURUSD event risk of the week. EU PMIs are important but no one expects them to be good enough to change perceptions on ECB policy. In contrast, Fed rate expectations are bit more sensitive given that USD rate increases are only a question of when, not if. That said, few expect anything more than a very gradual increase over many years, but a big inflation surprise could still ignite some short term speculative spike in rates. We doubt it would do more than that, as markets will remember that Janet Yellen believes inflation data to be “noisy” and thus not influential with the Fed in the short term.

In contrast, Forex Factory’s real time sample of retail traders shows a sharp swing to the long side, as they appear to be anticipating a bounce off the 1.35 support level.

As long as the above mentioned key fundamentals driving the EURUSD remain largely unchanged, the pair remains locked in its 1.35-7 range in the near term, with any breaches of support around 1.35 likely to be temporary until one or more of those fundamental supports weaken.

Longer term anticipated rate advantage for the EURUSD continues to suggest the USD is basing and that the EURUSD’s long term downtrend remains intact.