FX Traders’ weekly EURUSD fundamental picture, this week’s market drivers that could change it- the bullish, the bearish and likely EURUSD direction.

As we noted in our weekly technical analysis for the pair, a bounce or only minor decline was likely in the near term. However changes in the Ukraine crisis could be a game changer and send the pair plummeting.

As we go to publish this Saturday night GMT, an escalation in the Ukraine crisis appears set to dominate markets in general and the EURUSD in particular.

First we’ll look at what drove price action last week and attempt to discern some lessons. Then we’ll look at the likely top EURUSD price drivers for the coming week.

First, the term ‘market mover’ is rather relative in a week in which the pair hardly moved. So we’ll look at what was behind the daily movements and attempt to discern some lessons from them.

As shown above, the pair’s major moves lower were on Monday and Tuesday, nothing moved it Wednesday, and Thursday, then it popped higher Friday.

What were the primary market drivers behind these moves?

There were no obvious drivers, so given the pair’s bounce late last week to near term resistance was likely just a technical move, i.e. short term buyers taking profits or opening new short term shorts, or, (just as likely) no clear reason, random noise caused by a few big sells unrelated to any news. No one else seemed to be offering any reasons either, as major daily commentary suddenly shifted to longer term issues for the pair (a common shift of topic when daily price action has no clear explanation).

Both German and EU ZEW sentiment readings came in far lower than forecasted, reminding traders that there is a great deal of concern about the potential economic harm of an escalation in military and economic sanctions activity related to the Ukraine crisis, as well as the generally weak stream of EU economic data, with more of the same sad story expected from Thursday’s GDP, jobs, and inflation data from Germany, France, and the EU. The EUR’s slump following the German ZEW release confirms that the survey result moved the pair for the day.

In addition, the CEO of German consumer goods giant Henkel said: “We expect the escalation of the Russian Ukrainian conflict as well as the persisting political turmoil in the Middle East to have a negative impact on the market environment.” As noted above, EU stocks rose on this news because it suggested more ECB easing, which has been one of the two big drivers of higher EU stock prices (the other being the absence of any major risk off events, particularly a new leg of the currently dormant but alive EU crisis.

Some job data from the US (NFIB small business index) and JOLTS job openings) suggested there was less slack in US labor markets than believed, supporting an earlier Fed tightening, so these data points might have supported the USD and augmented the EURUSD’s move lower.

Everyone in the EURUSD weekly forecast business expected Wednesday and Thursday to hold the most potential for volatility, however the pair was virtually flat both days. Equally surprising, a look at the daily price action shows that despite the almost uniformly negative data, on both days the pair probed far higher than it did lower, attempting a sell the news bounce. The pair shrugged off such negative news as:

So why no movement? Most likely reason was a involves a convergence of

Friday: The bounce appears to be mostly a technically driven as traders saw support holding for the past three days around 1.335 despite a lot of negative news, so they were waiting for an excuse to go long. We suspect the drop in 10 year US note yields and mixed US data Friday provided that excuse.

So what did the above price action teach us? That the economic events of the weekly calendar provided no meaningful surprises to change the thing that really matters – sentiment on ECB and Fed policy. Hence the near term technical support and resistance levels kept trading to a narrow range.

So what events have the potential to change investors’ views on where these central banks are headed? First, remember that the Fed is expected to move towards higher rates, while the ECB is expected to continue easing, the only question for both banks is the pace of their expected policy shifts.

Economic data for the US has been mixed but continues the theme of slow but steady recovery, which isn’t enough to justify accelerated Fed tightening.

The past two weeks have shown that the top two economies, France and Germany, have stopped growing, (Germany actually contracted), so there’s real weakness in the very core economies. Meanwhile, 2 weeks ago #3 Italy printed its second straight negative GDP figure and is now officially in recession yet again, and deflation remains a threat.

Therefore the most likely market moving news for the EURUSD will be something that raises expectations for change in policy is more ECB easing, so the focus stays on EU data. The EU events with the most potential to fuel higher expectations for further ECB action are:

The ECB’s next easing step, some kind of QE, is not expected to come soon because the effects of the current easing steps have yet to be fully felt. However, falling bond yields for not only Germany, but also others EZ members like Italy and Belgium, may point to rising expectations for QE, because that would drive EU yields down across the board. Indeed, note how Spanish yields have been falling at about the same pace as Germany’s. 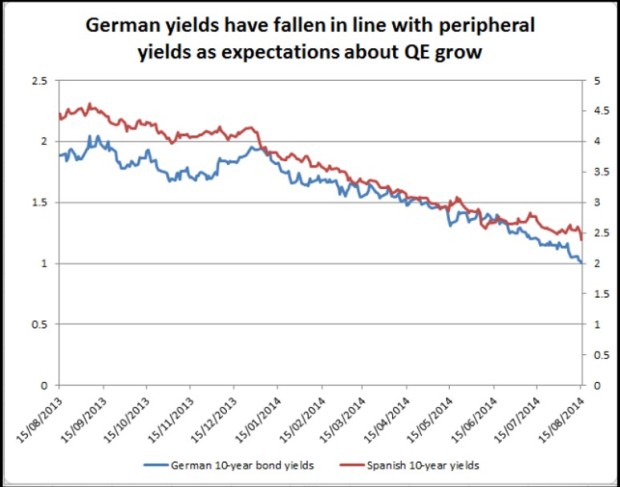 In other words, falling German yields could be attributed to simple safe-haven demand. However the fact that other, less credit worthy nations are also seeing falling yields suggests something other than flight to safety demand – that QE expectations are rising.

Of course, the biggest potential EURUSD driver is obviously any escalation or de-escalation in the Russia-Ukraine crisis. On Saturday both Reuters and FT.com reported that Russian separatist forces are receiving an influx of soldiers and equipment, including armored troop carriers and tanks.

These confirm earlier reports from Ukraine that its forces had engaged Russian armored forces.

So much for hopes of calming tensions in the region. Instead, markets are likely to open Monday with an attempt to factor in rising risks of economic damage from an escalation in both military action and economic sanctions.

If in fact Russia is openly stepping up increased support for the separatists, that fact alone will dominate markets and undermine the influence of scheduled calendar events. Noted above and below.

As noted above, this week’s calendar’s main action happens Thursday, with the big EU data dump and ECB President Draghi’s speech. As always, the top tier China data listed below could influence overall risk appetite, however Russia’s reinforcing of its proxy army of Ukrainian separatists over the weekend appears to signal yet another escalation in the crisis. In recent weeks, sentiment about economic risks stemming from Ukraine has been THE market driver, overwhelming all else.

If in fact Russia is now openly supplying the separatists, this news will be the big bearish force of the week that will pressure risk assets, including the EURUSD.

All: Day 1 of 3 of Jackson hold symposium (has been a venue for major Fed announcements, none anticipated, however.

All Day 2 of 3 of Jackson Hole symposium

All Day 3 of 3 of Jackson Hole symposium

The EURUSD short position has become a crowded one per COT reports put out last Tuesday. However our real time sample of retail traders continues to attempt to fade the multi-month downtrend in anticipation of a bounce. If the Ukraine conflict is heating up, they’ll have to wait longer, or close their long positions. 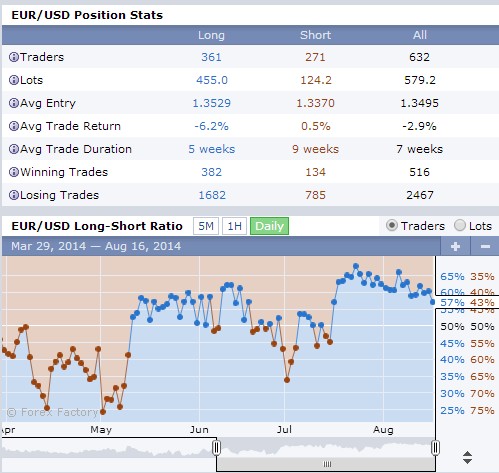 Biggest Questions & What To Watch To Answer Them

Is Russia increasing support for its proxy army of Ukrainian separatists and showing a new determination to annex yet another chunk of Ukrainian territory? If so, risk assets in general, and the EURUSD in particular, are likely to end the week lower. The West will need to choose to either give up (either openly or by simply continuing with mostly toothless sanctions) or to continue with another round of economic sanctions that threaten to scare markets and rattle Europe’s already fading recovery.