Continuing the theme of the past 6 weeks, the medium term outlook continues to deteriorate from a variety of technical perspectives, chart patterns, support breakdowns, and strengthening downwards momentum. In addition, the pair’s slow grind lower within its descending channel from of the past 3 weeks accelerated decisively, as Ukraine tensions, data, and central bank expectations all turned further in favor of the USD. See our fundamental analysis for details, of which there are many.

The most outstanding change for the worst is the third consecutive penetration of yet another key support level in as many weeks.

Three weeks ago the pair decisively broke through its 200 week EMA around 1.342 As the oldest of our EMAs, such a confirmed breach takes real conviction among traders that the EURUSD is headed lower..

Last week confirmed that downward breakout with a modestly lower weekly close, yet support at the 1.333 level held for the third straight week despite plenty of bearish news from both the Ukraine crisis and the economic data, offering EURUSD bulls hope for an oversold bounce.

However the past week illustrated how poor most momentum and positioning indicators are for timing bounces, and how it pays to stay short as long as the pair remains within its double Bollinger® band sell zone. The pair not only took out that 1.333 level, it closed Friday below the next major support level at the 38.2% Fibonacci retracement level of the uptrend of August 2012 – May 2014 at 1.3245, to close around 1.3242.

Here are the details of the key elements of the technical breakdown on the weekly EURUSD chart.

However the principal behind the H&S pattern applies here. That is, a failed attempt to rally, followed by further declines that suggest the EURUSD’s rally that began in mid-2012 is officially over.

Note the specific elements of the Head and Shoulders Topping Pattern:

Looking at both weekly and daily charts for the EURUSD:

The theme of the current downtrend as evolved from one of “strengthening downward momentum versus strong support” to one of “downward momentum overwhelming final strong support,” as the past week saw the prior 3 week’s support smashed and support at the 38.2% Fibonacci level bent. This had held since mid-late 2013, depending on where you place its first test.

The unequivocal message from the weekly charts is that the pair will find itself lower in the months ahead, albeit with possible normal counter trend moves within the longer term downtrend.

For perspective, remember that the EURUSD has been in a long term downtrend ever since July 2008, and its most recent highs of April 2014 were stopped cold by the already well-established downtrend line from mid-2008, as illustrated below. 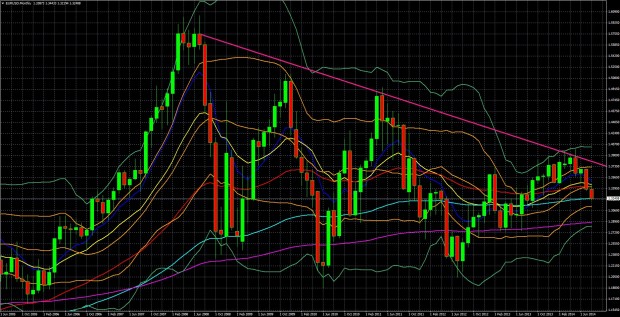