Did the ECB’s surprise new stimulus, likely the last for 2014, signal an end to bad news for the EUR? FX Traders’ weekly EURUSD fundamental & technical picture 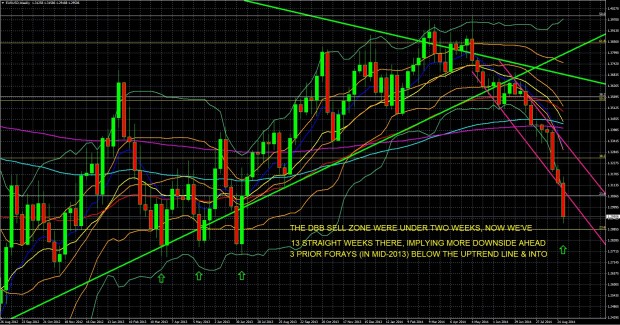 With the weekly close at 1.2952, the pair has decisively taken out what had looked like the next big support and 1.31 (which had the support of the descending channel’s lower line), and has also probably broken the psychologically important 1.30 band (which had the support of the 23.6% Fibonacci retracement line of the 2008-10 downtrend). The odds continue to favor more downside in the weeks ahead. Consider that the pair:

These bearish technical factors as well as the number of former strong support areas that are now converted to strong resistance bands suggests enough technical damage to limit any rallies in the future, even before considering that the ECB is done with new easing measures for the rest of the year (see our fundamental analysis for more on that).

The next support level is the 1.2750 area. With the divergence in Eurozone and U.S. data and monetary policy expected to continue widening in the coming weeks, the only questions are:

It should only be a matter of time before this support is tested with a move down to 1.25 becoming increasingly likely.

Indeed, the decline that began in May has taken the EURUSD down enough to be in range of testing support of its 13 year uptrend line in the 1.2952 area.

The weak attempt at a bounce, fueled by false hopes of calming in the Ukraine, was crushed by Thursday’s ECB announcement of new easing, which led to the third breakdown of near-term support in as many weeks.

A look at the daily price action tells us all we need to know about the EURUSD’s recent top price drivers.

Top Market Movers & Their Lessons For The Weeks Ahead

Looking at the daily chart above it’s clear that the only thing to materially move the pair this week was the sooner than expected new ECB easing announced at Thursday’s monthly meeting and press conference. See below for lessons and ramifications of this ECB surprise move.

Granted, Wednesday’s ultimately false rumors of a Ukraine-Russia cease fire appeared to give all things European a modest boost, including the EURUSD. However so far nothing suggests Russia has any intentions of reversing its drive to control more Ukraine territory, directly or via local proxies ‘rebels.’ Indeed, Russia denied being able to be party to a ceasefire because it denies any role in the conflict. Similar to negotiations on Iranian nuclear weapons or on a Hamas deal to peacefully coexist with Israel, these talks to are just delaying tactics designed to lull the more gullible elements of the opposing side into a dangerous complacency and delay any meaningful opposition.

As we predicted last week, the combined impact of the NFP and unemployment reports were minimal, at most, it provided an excuse for a modest counter move higher that still leaves the pair sharply lower on the week. Why did these reports fail to move the pair up much, despite the theoretical weakening of the USD because weaker employment reports should delay USD-supportive Fed tightening? The short answer is, that the jobs report changes nothing in the Fed’s policy and thus in perceptions of the value of the USD.

With US data continuing to show improvement, only a smashing beat of forecasts could have aroused speculation that the Fed might view US unemployment as improved enough to warrant faster, greater tightening.

In sum, the reports didn’t pack enough of a negative surprise to change sentiment about the pace of Fed tightening. Meanwhile, the ECB is indeed accelerating its easing, so the USD continues to look better relative to the EUR.

See below for lessons on this.

Instead of holding policy steady, or merely saying that new easing steps were coming, the ECB surprised most observers with not just one but two surprise easing steps:

–At the monthly rate announcement, an interest rate cut of 10 bps: This took the ECB’s main overnight rate down to 0.05% (from 0.15%), its marginal lending facility down to 0.3% (from 0.4%), and its deposit facility went deeper into negative, to -0.2% (from -0.1%). Following this announcement, the EUR plummeted against the dollar, trading below $1.30, its lowest level since last summer.

— Next, at his ECB President Mario Draghi’s press conference that followed the rate decision, he again surprised markets by announcing that the ECB would begin buying asset-backed securities and Euro-denominated covered bonds in October. He said the scale of these purchases was as yet unsettled, but he did say the ECB was ready to expand its balance sheet as part of these operations (i.e. no corresponding asset sales to “sterilize” or maintain the current money supply.

–He also repeated much of what he said in August at Jackson Hole. In particular, he pushed for fiscal and structural reforms as equally or more important means of spurring growth in addition to the ECB’s monetary easing. These remarks were widely seen as a challenge to politicians around the Eurozone, namely German chancellor Angela Merkel, to cut back their austerity programs, which Draghi and many other policymakers believe, have done more harm than good, because they cut GDP as fast or faster than they cut debt.

Lessons From The ECB Meeting

Details on the ABS program will be released next month. Based on Draghi’s remarks, markets can expect a substantial package. Note that this one big open item provides the remaining big fundamental fuel from the ECB for some additional EUR downside.

Beyond that ABS announcement, new ECB stimulus announcements are likely done for the year.  Although some kind of QE remains on the menu, we’ve don’t see that coming in 2014. The ECB has two good reasons to wait before doing anything more.

–There’s already a huge wave of new stimulus coming, with the TLTRO, ABS and interest rate cut.  Any central bank would need to see how well these measures are received by the market and the economy before considering a more radical option like QE, even if that was clearly legal.

However QE is currently widely seen as illegal. The direct funding of national budgets by the ECB is illegal per the EU’s Maastricht treaty.  Granted, there are those who’ve said that if QE is done for the sake of price stability, which is part of the ECB mandate, that perspective shift might be enough to get Germany, the only likely opponent that matters, to withhold objections.

There are other issues with QE in the EU (although we still think it’s likely to happen eventually). See here for details.

Meanwhile, the EURUSD and other major EUR pairs should remain under pressure from:

Lessons From The US Jobs Reports

Friday’s very modest EURUSD bounce, plus the gains logged in most leading global indexes, both reflect a consensus that the reports didn’t change anyone’s perceptions about US growth.

The Top Market Mover Of The Week

The ECB was expected to ease eventually, maybe even talk in general terms about coming measures. It was not generally expected to actually announce a rate cut as well as new plans for additional easing. Instead it did both, thus sending the EUR plunging and EU stocks soaring, in accordance with the news’ expected effect on the value of the EUR (bad because it’s dilutive and suggests more of the same policy coming) and stocks (good because it’s expected to inflate asset prices

Admittedly, the ECB’s surprise rate cut, and announcement of coming asset purchases of European bonds, ultimately had little immediate impact on US or Asian markets.

However, its impact on European stock markets and the entire currency market (which dwarfs the global equities market in trading volume) was so strong that the event ranks as a/the top market mover of the week, especially given the limited impact of other events on global markets

Lesson: An Example Of The Ingredients Needed For A Market Moving Event

Lesson: Why Any Good Fundamental Analysis Requires Awareness Of The Technical Picture Too

As I discuss in my book, except for very short term trading and day trading, fundamentals usually drive trends. However there are certain situations in which the technical picture actually influences how markets react to fundamental data.

There are other situations. For example, nearby strong support or resistance can bias traders’ reaction to news. I discuss these too in depth in my book.

Continued US Outperformance Of EU

The US continues to utterly outperform the EU. Following a 22.5% gain in durable goods orders 2 weeks ago, last week’s data highlights include:

Speculation about the size of the coming ECB ABS purchases package, and about economic damage from Russia/Ukraine related sanctions, continue to be the big drivers to watch. Otherwise, there isn’t much else for now.

Note that the USD’s rally continues to be driven more by weakness in the EUR, as well as in the GBP and JPY (all of these three were hit by fundamental issues) rather than any improvement in America’s economic outlook, which remains one of slow but steady improvement. For example, the USD gained 1.6% against the Pound, 1.4% versus the EUR and 1% versus the JPY, while it was did little against the commodity dollars.

So with USD strength still based on the misfortunes of the EUR, GBP and JPY, we need to watch events influencing those currencies.

This week’s calendar doesn’t offer a lot, though the following week’s FOMC rate statement and press conference on the 17th may offer some updated insights, though we doubt it.

Remember however, that the crowded EURUSD short position makes the current trend vulnerable to short term bounces on even modestly bullish news.

US: Retail sales m/m, preliminary UoM consumer sentiment, business inventories (remember, much of the recent GDP beat was attributed to inventory buildup, so we want to see if inventories are getting sold or setting up to become a drag on the next GDP reading as payback.

Biggest Questions For The EURUSD