Lessons for the coming market week from the US for traders and investors in stocks, indexes, forex and other global markets, AND the secret advantage that got the Seahawks and Broncos to the Super Bowl

The following is a partial summary of the conclusions from the fxempire.com  weekly analysts’ meeting in which we cover the key lessons learned for the coming week and beyond.

Overall Technical Picture: The State Of The Global Rally

Before delving into the lessons for the week, for the sake of context it’s helpful to see that the long term uptrend in global indexes is clearly starting to buckle, and in some cases, is already broken. 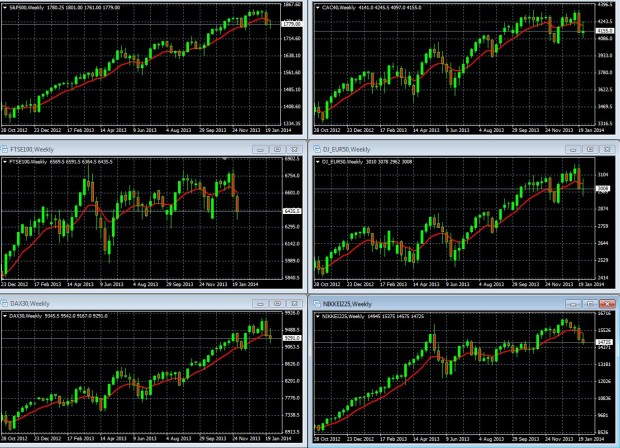 As we can see from the chart above, while the uptrend dating from Q4 2012 is still safely intact, the later leg up in the uptrend dating from June 2013 is at or near the breaking point. Both the sample US and European indexes closed their first down month since August, and Japan had its first drop since October, its first material decline since August. Although the more gently sloping uptrends from late 2012 are still safely intact, the stronger uptrends since the summer of 2013 are close to violating their upward trend lines, and the FTSE 100 has already done it.

We’ll look at the fundamental drivers behind this pullback, and other lessons from the past week’s market action, below.

Here’s what we learned from US developments.

As expected, the Fed continued with its $10 bln/month cut in bond purchases Wednesday. Although the move was no surprise, markets disliked it, perhaps too many hoped that overseas troubles would cause a pause. That view has some justification, regardless of recent Fed indications that overseas events don’t influence its policy. Even a casual study of Fed behavior during the GFC says otherwise, and rightly so – global problems can quickly become domestic problems.

Meanwhile, the lesson for investors is that we can expect the taper to continue as planned, $10 bln less each month, regardless of whether a given month closes out bullish or bearish. Don’t even think about betting on a change of pace unless there is a sustained or sudden very dramatic change (read: genuine contagion threat).

Striking A Blow Against Volatility

The real reason for the Fed ignoring the EM turbulence, as well as last month’s poor job reports, was a simple, reasonable decision not to be swayed by short term market volatility or a single bad monthly data print. If the Fed did give the impression that it was moving with short term events, it would only give every daily market mover and fluctuation greater importance and stoke market volatility.

Note that unlike the first taper, this one occurred in the context of worsening data and a risk off environment. By continuing in the face of what so far are just short term market moves, the Fed helps discourage unpredictable appearance of “good news is bad news-bad news is good news” market behavior.

The unanimous vote to continue also helps cement the view that the taper will continue unless the economy shows signs of longer term contraction.

The Fed could do more to stabilize markets by clarifying its forward guidance, making clear which market indicators they’re most concerned about and which specific thresholds, if any really matter. The unemployment rate of 6.5% was not a great choice in retrospect, because it can drop due to discouraged workers who need work leaving the official labor force. In other words, it can be deceiving, looking good even as job conditions worsen.

The big benefit would be to avoid markets misinterpreting the Fed and bidding up interest rates prematurely, thus damaging the recovery.

An interesting side note from Thursday’s US market action was a rare simultaneous rise in both stocks and the USD. See here for details on why the negative correlation between the two (if you don’t thoroughly understand it, you should).

Here’s the lesson: While this is rare, it is in fact NOT uncommon IF stocks and the USD share the same bullish driver – something that increases demand for both.

On Thursday the cause of the simultaneous increase in stocks and the USD appears to have been a combination funds flowing into US stocks, which increased USD demand, and the relatively good GDP print, which points to growth (good for stocks) and thus continued taper and ultimately interest rate increases in the distant but now less distant future (good for the dollar).

The classic example is some kind of data release that not only indicates economic growth (good for stocks) but also raises expectations that the fed will raise benchmark US interest rate increases (good for the USD) sooner or faster than previously expected. Whether the report can do that depends on whether markets believe that report is a key factor in fed rate decisions. Really strong US jobs report releases can send both stocks and the dollar higher because besides being bullish for growth, improving employment is a central determinant for when the Fed raises rates.

If markets thought that some other growth metric was the key to higher rates, like earnings, then expectation-beating earnings season results would be the thing to send the dollar rising with stocks.

Actually, the chief economists of Goldman Sachs and Credit Suisse now believe that inflation monthly readings could become as important as the employment reports for anticipating Fed policy, given its increased prominence in Fed forward guidance.

Although GDP growth slowed in Q4, anything above 3% growth still supports the broader recovery theme.  This still solid growth is a key reason why stocks can still rise even as the Fed tapers. Forward guidance appears to be working thus far, because the increase in 10-year yields has been minimal, and is down from a month ago. That means that the real threat of the taper – higher rates – has been avoided and so the world remains safe for risk assets, at least those in the US.

The tone, and thus impact, of US earnings season is usually established by no later than the third full week of earnings reports, which concluded Friday January 31st.

The overall tone of earnings season, after two intensive weeks packed with big names reporting, is that earnings growth, while not great, is good enough to allow markets to advance if supported by additional good news going forward. Indeed, with US indexes remain at or near strong support on weekly charts as of the close of the week, so the technical picture allows for a relief rally this week if there is new bullish news. That means Friday’s US jobs and related reports leading up to it (that hint at Friday’s result) will be even more important than usual. A second straight weak reading could provide enough bearish fuel to power the ongoing but slowing downtrend in risk assets of the past 2 weeks, and collapse recent support levels.

A Final Lesson From The US – A “Key” Common Denominator?

My son Benyamin managed to get the weekend off from the army to catch the Super Bowl, and noted that an additional common denominator between the two Super Bowl contestants, the Seahawks and Broncos – each is from one of the only two states in the US that have legalized pot.

I don’t see any obvious explanation, just noting this.

For more useful blazing insights on certain key relationships and the lessons for the coming market week, see Part 2 of this post.