The following is a partial summary of the conclusions from the fxempire.com  weekly analysts’ meeting in which we share thoughts about key developments worth a special report – this one on winners and losers if the Ukraine-Russia crisis escalates

What began as an internal struggle has morphed into a 21st century East-West cold war drama, with this conflict seen as the battle that determines whether all currently independent former FSU satellites will remain free or again disappear under Russian hegemony.

That’s the simplified picture that gives this crisis its drama.

Why All The Fuss?

The whole crisis is over the future political, cultural and economic orientation of Ukraine and whether it moves in the direction of becoming more like Western Europe or more like a Russian vassal, with all the economic and political changes implied.

What began as an internal struggle has morphed into a 21st century East-West cold war drama, with this conflict seen as the battle that determines whether all currently independent former FSU satellites will remain free or again disappear under Russian hegemony.

That’s the simplified picture that gives this crisis its drama.

For a more detailed timeline of events see here

At this point the focus of the conflict is on who controls Crimea, Ukraine or Russia.

First, let’s be clear that we don’t see appetite on either side for a prolonged escalation. This will likely be a slowly evolving conflict, with Russia winning control of parts of Ukraine while the in the near term the West does little, given Europe’s dependence on Russia for a third of its gas and the lack of vital strategic interests that might justify military action.

However if there should be a continued escalation, here’s a review of the likely market effects and ideas on how to play some of them.

Biggest Losers: Russia, Ukraine, And Those With The Most Economic Exposure To Them

Unless otherwise noted, the specific economic damages noted below impact most those closest to the conflict: the combatants, those with the most economic ties to them either via proximity or extent of economic relationships. In other words, slower economic growth in Europe, with those directly involved in the conflict suffering the most, followed by those in closest proximity and with highest exposure to the Russia, Ukraine, and its neighbors.

This slower growth comes in a variety of forms and challenges. Here are the most important ones.

Even a radical shift in the Ukraine towards the West was no material military threat to Russia. The invasion smacks of a return of the old militaristic Russia. Diplomatic and economic sanctions might not do much to hurt Russia, however market reactions could be the real problem.

Many foreign investors could flee, given the Kremlin’s proven willingness to put its military ambitions ahead of the country’s economic interests. Foreigners are estimated to hold 70% of Russian stocks.

The use of force to keep Ukraine, or parts of it, in Russia’s orbit will further deepen investor mistrust of Russian institutions, reinforcing Russia’s image as riskier business environment with a leadership still stuck in the Soviet era mindset and not quite ready for prime-time capitalism.  Those investors who stay in Russian assets will demand higher returns, and thus lower prices, as a risk premium for doing business in Russia versus other emerging markets. We’re already seeing that happen. For example, Russian stocks trade at the cheapest forward earnings multiples across emerging markets, about 4.7x their estimated 2015 earnings. In comparison, shares in another troubled emerging market Turkey, trade at more than 7x earnings. Much of that discount is already due to corporate governance fears (aka corruption) and lack of faith in local institutions (i.e. property rights and personal liberties not well protected).

Higher Energy Prices, Particularly In Europe: Energy prices in Europe have jumped since the start of the crisis. Russia is one of Europe’s main energy suppliers. This trend may well be more enduring. If the US allows more energy exports, it will find an eager market in Europe that may well accept higher transport costs in return for freedom from Russian coercion.  Much of Europe’s gas from Russia comes via pipelines that pass through Ukraine, so any military threat to those pipes could send prices soaring.

Leaders agreed, in effect, to be jolly annoyed about Putin’s annexation of Crimea. They may even cut up some oligarchs’ Harrods storecards. But to go much further? Difficult, when Russia is supplying a third of Europe’s gas. As Finland’s Europe minister candidly put it: “There isn’t that much that we could do, at the end of the day. And I think the Russians know that.”

Europe is a recession-struck continent dependent on a Kremlin-controlled energy price. Putin cleverly cut Gazprom tariffs to the region last year, ramping up its dependence on Russian gas to record levels. And in so doing, he effectively bought EU foreign policy.

Here’s a look at Russian gas exports to Europe 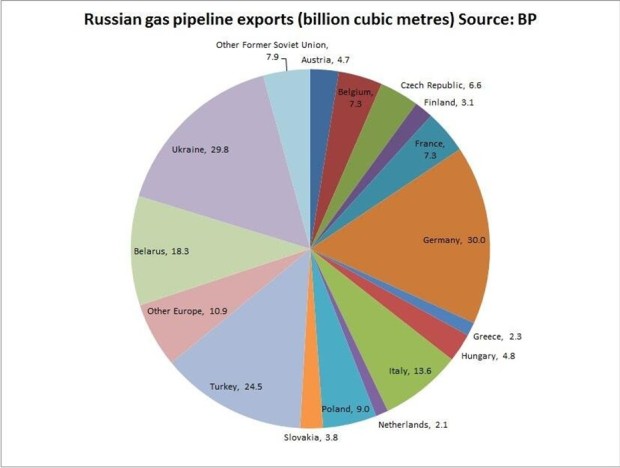 a)      In the past 6 years the explosion in shale oil and gas production has sent American crude output soaring by 60 per cent, taking the country into a thoroughly unexpected era of energy abundance. US gas prices have fallen by two thirds; factories and jobs are flooding back to former rust belt states. By the end of this decade, America will be exporting more energy than it imports.

b)      This gives the US the ability to threaten to undercut prices on natural gas, which is Russia’s primary export in an otherwise struggling economy. See here for details.

All sides don’t want to lose face, nor do they want a protracted military conflict. That means the likely outcome is Russian control of at least parts of ethnically Russian Ukraine while the West responds with some kind of sanctions, so this won’t end fast. Ukraine is in Russia’s backyard. It is not a vital strategic interest for those who signed treaties to defend it, the US and UK, nor is there any popular support in either nation to sacrifice blood and money for Ukraine. Therefore treaties to protect territory will be ignored/reinterpreted, whatever. Until Europe secures replacements for Russian gas, expect little action at all beyond mostly symbolic sanctions that won’t risk a gas cutoff to Europe.

Meanwhile, Russia must realize, as did OPEC, that withholding sales of your primary export product is a dual-edged sword. You risk sacrificing needed market share for the sake of politics. The crisis will encourage Europe to seek alternative energy sources, and move the US to expedite increased energy export capacity for its strategic as well as economic benefits.

The lesson of the US failure to honor its defense obligations to Ukraine will be noted in Jerusalem and Tokyo, as well in Teheran and Beijing, and other capitals where the US still needs its security treaties and the threats they imply, to be taken seriously if the US is to be able to efficiently promote its interests and those of its allies.

Don’t be surprised to see further Chinese aggressiveness with Japan over the disputed islands, or more flagrant Iranian development of its nuclear program and terror support.