EURUSD Mid-Week Outlook: Technical And Fundamental Drivers for the Next 5 Trading Days

FX Traders’ mid-week EURUSD fundamental & technical picture and what could change it- the bullish, the bearish and likely EURUSD direction

From Friday through Monday the pair stabilized into a tight trading range with support holding around 1.375, supported by the 100 day EMA,  as the effects of June ECB easing speculation appeared to have been priced in for the moment.

Then on Tuesday it was reported that the one remaining source of meaningful opposition, Germany’s Bundesbank, was comfortable with the ECB announcing new easing measures at its June meeting.

That was enough to start the pair’s next leg lower. As of midday Wednesday support around 1.37 held firm, and the pair began a recovery bounce, due to a combination of:

See the below conclusions section for the likely range for the remainder of the week.

As we noted in our weekly EURUSD outlook, last week’s weak German export data and inflation data had already suggested that Germany would be more open to further easing. This week’s poor German ZEW reading, as well as falling German and French inflation data, further suggest German acceptance of some easing measures.

Everyone agrees that there will be new easing measures from the June 5th meeting, and that the ECB wants to see more lending and inflation, and a lower Euro.

However the exact mix and extent of the tools the ECB will likely remain unclear until June.

Reuters had a report out Wednesday on the options under consideration. Other than the near certainty of a rate cut of 10-20 bps from the current 0.25 refinancing rate the anonymous sources simply rehashed the usual options and offered no details about which were likely or to what extent. Once again, in addition to the rate cut, the options include:

It’s worth noting that none of the sources believed a US-type QE asset purchase program would come unless things deteriorated further.

Although some may wonder why, with the EZ now supposedly in recovery mode, the ECB would consider radical steps like negative deposit rates or QE when it didn’t do so at the darkest times of the EU crisis.

We’d suggest the reason is that the ECB knows the EU’s recovery is far from certain. Echoing that sentiment, FT.com’s Martin Wolf wrote Tuesday that whatever the ECB easing steps come will be “vastly too late and, in all probability, too little.”

For the remainder of the week, the key events are mostly from the US, but even the top tier data is unlikely to move the pair much. For the EURUSD, the focus is more on the remaining EU data that might influence the ECB’s policy changes in June, particularly inflation and credit reports. Through next Wednesday (our next mid-week report) there isn’t much of that (only German PPI).

Thus unless we get further reports from EU officials that feed speculation on the coming ECB easing, the pair is likely to drift with general risk appetite. For the rest of this week, the key events are US inflation and manufacturing data Thursday, then on Friday US consumer sentiment and housing reports.

None of these are likely to rock the pair, so we stick with our call from our weekly outlook, that the pair remains within the 1.39 -1.365 range, with bias to the lower end given the coming easing. We hesitate to call a top to the current EURUSD uptrend until we get a break below 1.35.

For the near term, the pair moves with speculation in ECB easing and little else. 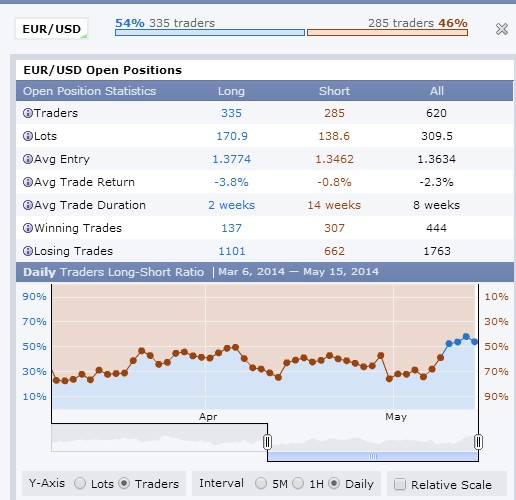 Our real time sample of retail trader positioning for medium term trades (average holding period 8 weeks) shows traders basically unchanged from the end of last week. They’ve shifted to a slight majority to the long side over the past week. Apparently they believe the ECB’s easing is mostly priced in already, and they’re waiting for the bounce to come, as the longer term trends that have kept the pair moving higher, the revival of risk appetite and confidence in EU stocks and bonds, combine to fuel further gains.

← 10 REASONS WHY RUSSIA-WEST TRADE CONTINUES AS USUAL & HOW TO PROFIT
EURUSD Weekly Outlook: Showing Weakness Or Resilience? How To Tell And Ramifications →