As the weekly chart above shows, strong support held through the worst the ECB could throw at it. This support is buttressed by five layers of converging support:

The pair managed to stabilize, and even close slightly higher for the week at 1.3643. Given the failed deep probe of lower support and fundamental outlook described below, the odds favor some follow through to test higher towards the next major resistance around 1.37 area comprised of the following elements:

A confirmed break beyond that level opens the door for a test of the long term downtrend line around 1.376.

The fundamental outlook discussed below makes a solid case for the EURUSD having found a floor, but offers no compelling evidence for a serious attempt to break above the 1.39 area that comprises the top of that range.

The Bullish Wildcard: Will The EURUSD Resume Tracking The Indexes?

That said, with uncertainty over bearish ECB moves over for the coming months, the pair is now once again free to resume tracking overall risk appetite as reflected by the S&P 500 and other leading US and EU indexes, as it did before the ECB’s May hints of coming easing steps in June.

That adds another bullish element to the purely EURUSD technical picture. These indexes have all been moving higher and mostly remain firmly within their double Bollinger® band upper or “buy” zones that suggest the odds favor continued uptrend on the weekly charts. 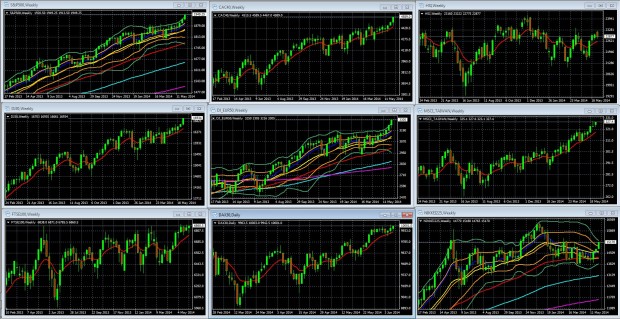 The EUR’s best hope for a bullish breakout past that 1.376, then 1.38 areas, lies with its quickly reconnecting with the continued bullish risk trends displayed in these indexes. If the pair starts playing catch-up after a month-long disconnect it could be right back around 1.39 in short order.

Longer term the USD should eventually attain its long anticipated rate advantage, but that remains a distant prospect still about a year away at earliest per the current consensus.

This was the biggest event for forex markets of the year thus far, and may prove to be the event of the year. We’ve prepared a special report detailing the key elements, lessons, impact, and likely future direction of the new stimulus package here.

Here’s a summary of the top ramifications for forex traders. 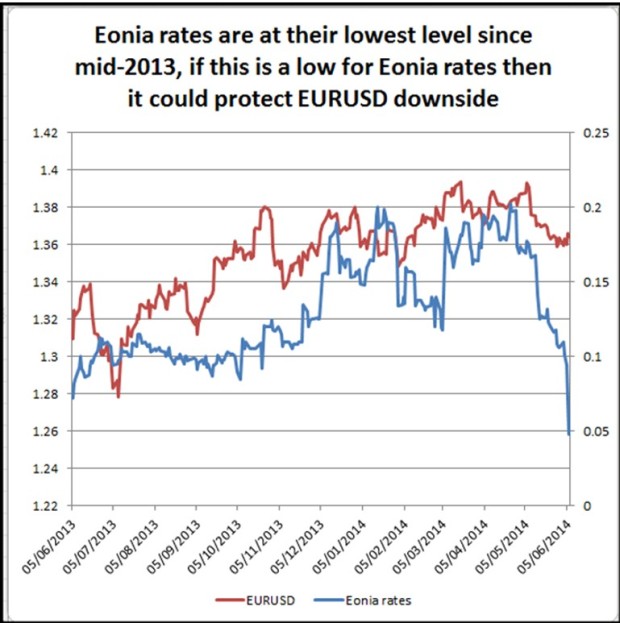 Again, full details on these see our special report here.

The Commitment of Traders (COT) for the 10-year Treasury note futures two weeks ago showed short positions getting cut back. Last week’s report, the most recent we have, shows traders again showed a small net gain in short positions, so the short covering that drove down 10 year yields (and supported the EURUSD) appears done for now.

Latest COT Shows EURUSD Could Get Some Bounce From Short Covering

In addition to the technical factors cited above, another reason to believe in a EURUUSD bounce this week is that per the most recent COT reports, before Thursday’s ECB announcement speculators had the smallest long position since last July and the largest gross short position since last August.

In contrast, the smaller but real-time sample of retail traders shown below shows traders essentially split between longs and shorts. 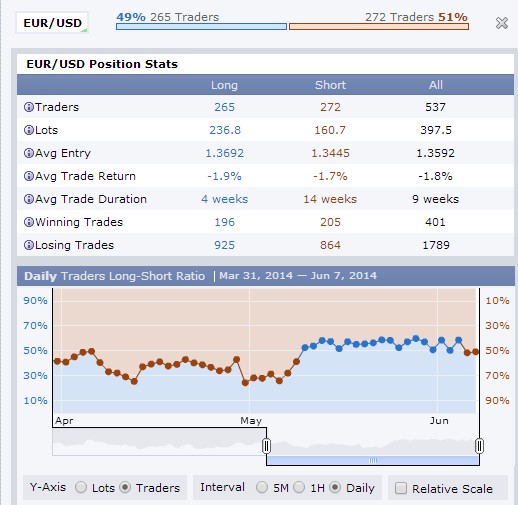 May US Jobs Report Irrelevant, Losing Influence Too?

The news here is that this usually big, at times climactic monthly report had no impact on the pair. Worth noting:

With the Fed policy widely believed to be set (for reasons we cited in depth here) for the foreseeable future unless it sees key trend changes in inflation, jobs or other top tier data, one month’s data means little. That means the jobs reports are generally less influential than a year ago, when every report was seen as possibly moving sentiment on Fed policy, particularly the coming, dreaded QE taper.

The report was in-line with expectations and the ongoing slow but steady recovery theme, thus further reducing its impact to zero.

US Data Continues To Outperform EU

Here’s a chart showing how things have mostly worsened over the past month. 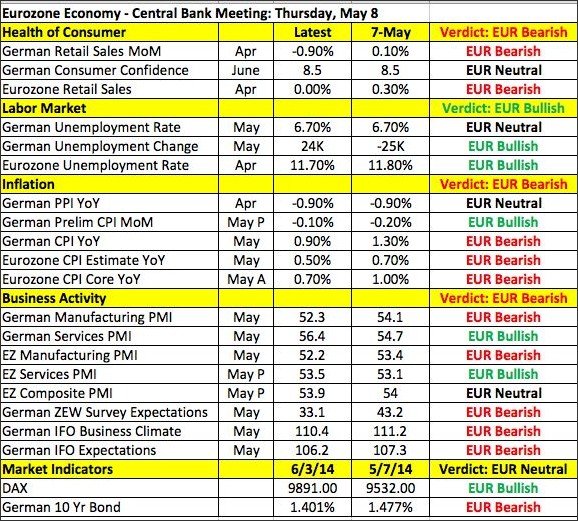 Note in particular the weakness in German inflation data. No wonder Berlin has softened its stance on inflationary policies. Remember too that the last batch of GDP reports showed multiple core EU nations, including France, on the brink of recession.

US: JOLTS job openings, said to be an important metric now for the Fed, however US jobs announcements have lost some of their importance because the Fed’s policy is believed to be set for now. For reasons we discussed  two weeks ago in our special report 2014’s Biggest New Investment Theme: Lower US Rates For A Much Longer Time, fed policy is believed to be fixed in dovish mode for the foreseeable future unless there are major changes in the current “slow but steady” US recovery story, be they bullish or bearish. Thus market sentiment on Fed policy direction is no longer influenced by any one month’s labor statistics, as it was back when fed policy was seen as more fluid and influenced by each month’s jobs data. Monthly jobs reports will only again become more influential again when they appear to be forming a new trend, be it bearish (implying more dovish fed policy) or bullish (suggesting faster tightening and rate increases).

Wednesday: Nothing likely to materially influence the EURUSD.