Political turmoil in the EU remains the big potential market mover and the most unpredictable wildcard in the deck this week. We’ve continued to insist each week that EU risk has been vastly underestimated, for example, in last month’s 2012’s Biggest Lie, 2013’s Biggest Risk.

Political turmoil in Spain and Italy clearly shook confidence Spain and Italy, the two largest debtor nations in the EU and thus the biggest solvency risks.

That reduced confidence showed up in the particular metric that matters most – bond yields. These spiked higher for both Spain and Italy this week. Markets (other than the EURUSD and other EUR pairs) shrugged off the news, but the EURUSD took its biggest weekly hit in since the summer.

As we discussed in our recent article on last week’s lessons for this week, political turmoil in both nations is especially significant because the only thing keeping their bond yields down has been a questionable confidence that these nations were somehow on the mend, despite the lack of any supporting evidence. On the contrary, actual data on both shows continued contraction, even before this week’s disturbing developments:

Ever since ECB President Draghi announced the OMT program in September, bond yields for Spain and Italy had been heading lower. As we’ve pointed out in past articles, ever since US elections and austerity debates stole the spotlight, numerous EU heads have declared the EU crisis over, despite the obvious fact that nothing had changed except for the dubious assurance provided by the OMT program.

Ignore the politicians’ claims about the EU crisis being over. Their talk is cheap. Bond markets are betting real money, and bond yield trends remain by far the best true indicator of confidence in a given nation’s solvency risk.

One of the sharpest observations I read last week came from BofA/ML’s top currency strategist David Woo. He noted the unusual divergence between the rising S&P 500 (implies optimism) and falling US consumer sentiment (implies pessimism from those who provide 70% of US GDP).

His take: just as the positive effects of the 2011 payroll tax cut took a few months to hit consumer consciousness, so too the coming months will bring declining spending as wage earnings realize the expiration of that payroll tax cut is over and they’re making less money.

Meanwhile, he warns, the additional spending cuts from the approaching sequestration, due to start March 1st, will exacerbate the pressure on consumer spending.  See here for details.

Consumer sentiment surveys can be market moving, however, the real test is what consumers actually spend. Watch US retail sales Wednesday for the latest update on how consumers really feel.

Big themes and highlights not already discussed above include:

Bank holidays in Japan and China should limit Asian liquidity and volatility Monday and Tuesday. China’s bank holiday extends through the week, and there isn’t much in the way of Japanese data other than a BOJ rate statement that is not expected to show any changes. The calendar thus provides little event risk from the big Asian economies (Aussie and NZ data rarely move markets beyond their own currency pairs).

Either of these, or both, could be market moving. Draghi’s remarks could easily move the EUR or markets as a whole if he continues to be downbeat about the EZ and attempt to talk down the EUR.

US retail sales could be influential if they surprise either way. As noted above, the payroll tax hike and lingering threat of job loss from sequestration should pressure retail sales. An upside surprise, however, would feed the prevailing risk asset uptrend, and news that conforms to ongoing trends tends to get more attention and reaction than new that contradicts the ongoing trend, which remains firmly higher despite looming decade highs on so many major stock indexes like the S&P 500.

There’s a wave of preliminary GDP reports from the EU. By themselves they tend to be second tier, however if they all point in the same direction they should be influential, as a rule. What makes me hesitate is that in recent months, with the risk asset rally in place, markets have tended to focus on German results when positive, and shrug off the usual signs of deterioration elsewhere.

G-20 meetings might provide some comments on the risks of competitive devaluations.

US UoM consumer sentiment: Likely to be influential only if it is in-line with retail sales data from Wednesday. Sentiment is interesting, but only insofar as it predicts real consumer spending. We’ll see real data for that Wednesday.

Most risk assets remain in firmly entrenched up trends. Note however:

A. Divergence Between S&P 500 and EURUSD: Aberration or Red Flag?

Most of the time, the EURUSD and major stock indexes, perhaps best represented by the S&P 500, move in the same direction, because both are bellwether risk assets.

For a full discussion of that correlation and the definition of risk versus safe haven assets, go to my book’s amazon.com page, and use the “Look Inside” feature to skim through the exceptionally detailed table of contents and index. I had to fight my publisher a bit for that extra detail, and she was kind enough to make the extra investment. So take advantage of it. You can read huge chunks of the book, my treat.

They diverged this week, with the S&P 500 index heading higher while the EURUSD made its first serious 1 week drop since this past summer, due to a combination of:

See here for details on these.

The S&P is still moving higher

Meanwhile the EURUSD, has not only fallen back (no big deal by itself), more significantly, it is now sitting right back on the major 200 week EMA (violet) that it had breached just 2 weeks ago.

We’re not going to get too excited about a potential reversal for risk assets yet, however, because both this EURUSD pair and the S&P 500 index still have lots of upward momentum.

Does It Really Matter?

We’re not going to get too excited about a potential reversal for risk assets yet, however, because both this EURUSD pair and the S&P 500 index still have lots of upward momentum.

Long term momentum on both the weekly S&P 500 chart, as well as the weekly EURUSD chart, is still strong, as shown by such compelling indicators as:

Both remain within their double Bollinger band buy zones. See 4 RULES FOR USING THE MOST USEFUL TECHNICAL INDICATOR, DOUBLE BOLLINGER BANDS for details on using and interpreting this indicator.

The various exponential moving averages (blue, yellow, red, violet) are all trending higher too, another sign of entrenched upward momentum.

For those who don’t already keep an eye on the EURUSD trend, consider doing so, even if you never trade currencies.  A few reasons to do so include: 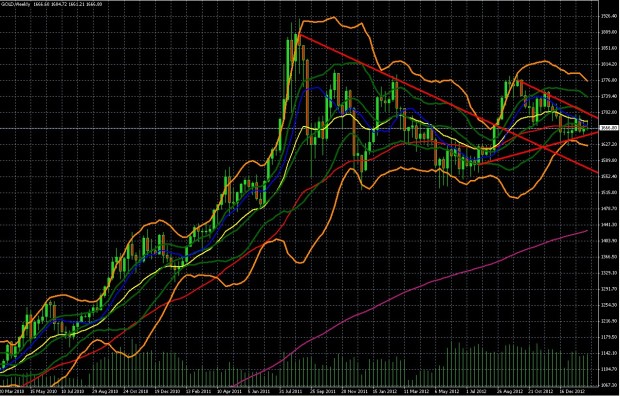 Gold Looks Ready To Break Out

The question is, in the short term, which way?

The short term fundamentals are contradictory. Gold is primarily a fiat currency hedge. Long term the effects of debasement of the most widely held currencies make this a long term buy. Much of the hot money has already been flushed out, so further drips might not bring much new selling.

Meanwhile, the ECB and BoJ have talked about new stimulus but done nothing. If they actually start printing soon, that could give new upward impetus to gold.

The overall trend remains bullish, and pennant patterns like the one we see above tend to suggest continuation –  for which long term trend?

The problem here is that we’ve a long term downtrend dating back to July 2011 on the weekly chart shown above, sitting with a decade long uptrend, shown in the monthly chart below.

Currently gold sits at its 50 week EMA (red), which has been strong support for over a decade, rarely breached for more than a few weeks. A decisive break below that would open the way for a test into the 1580-1550 level. However I’ve heard a lot of anecdotal evidence suggesting that there will be plenty of buying on breaks below 1600.

As we warned in our summary of 2013 forecasts – beware of fighting the Fed, especially when joined by the ECB, BoJ, and potentially the BoE and PBOC.

In sum, the likely big market movers are not coming from the calendar, but from less predictable EU and US political developments, and the weight of decade old technical resistance bumps against the upward thrust of asset price inflation from the central banks of the world’s largest economies.

Recent history suggests you don’t bed against the Fed et.al. However it’s going to be tough convincing most investors to open new longs given what has happened the last time major indexes were this high.

Look at that chart above. We are now at the far right side. Want to bet where that trend is headed?

It’s tough to bet against any of those. In the short term, however, politics tends to trump fundamentals. Therefore we’ve got:

I wish I could provide a more definitive overall bullish or bearish outlook, but the evidence, as typical, is equivocal.

Special Chance To Fight The Fed (ECB, BoJ Too): This Week Only

Whether or not you approve of central bank stimulus for the common good, there’s little doubt it’s bad news for the value of anything denominated in the currencies under threat of debasement, which happen to be the ones that are most widely held, the USD, EUR, JPY and GBP.

They say you can’t fight the central banks, but here’s a chance to strike a small blow that would help get investors dumping their cheapened currencies in favor of those backed my more conservative central banks.

For that to happen, more investors need to learn about ways to diversify into better currencies and assets linked them, simpler, safer ways than generally found in guides on currency or foreign investing.

First, if you haven’t done so already, see here  (North America) or here (outside of North America) for information about the most up to date guide on a wide range of conservative strategies to diversify into the currencies most likely to hold their value, and the assets linked to them. You can find a topic summary, reviews, and even read huge chunks of the book.

Second, please take a moment (about 120 seconds, actually) and cast your vote for “The Sensible Guide to Forex” in FXstreet.com’s Awards 2013 in BEST NEW BOOK category. The link to the survey is here.

A win might help draw some additional attention, and help others hear about how they can be liberated from the ongoing financial repression.

Thanks in advance for your help.

← Lessons For This Week: Disturbing Developments From Japan, EU – Part 2
Weekly EURUSD Outlook: How The Bullish And Bearish Forces Align →