EURUSD Weekly Outlook: The Good, The Bad, And The Ugly

Here’s how the bullish and bearish forces line up for the coming week for the EURUSD.

Context: The Big Market Drivers Since The Summer Are All Bullish for The EURUSD

Over the past months, the primary drivers of global markets have been

i.            Spain’s economy is deteriorating, as is its political stability, as we covered here and here.

ii.            At minimum, the banking systems of Spain, Greece, and Cyprus are insolvent, held up by a combination of loans they can’t repay, accounting tricks (over 90% of Spain’s social security fund was used to buy Spanish bonds), and printed cash.

iii.            To a lesser degree, the same holds true for Italy, though much depends on how its unpredictable elections next week play out.

iv.            As we’ve seen in the past, trouble in either of these too-big-to-fail nations hits confidence in the other one too, and in the EU in general. Given the lack of real reform, that’s particularly dangerous now because the only thing sustaining the prevailing complacency about the EU is unfounded confidence that the OMT and other liquidity bandages will keep it from new default threats

v.            continued overall EU economic contraction, as we saw in this past week’s GDP data. For example, see here, here 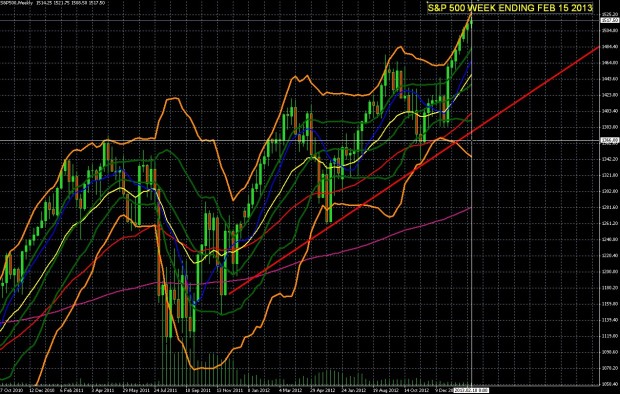 b. Similarly, the EURUSD could fall to1.3139 keep its medium term uptrend that began in the summer of 2012, as shown in the chart below. 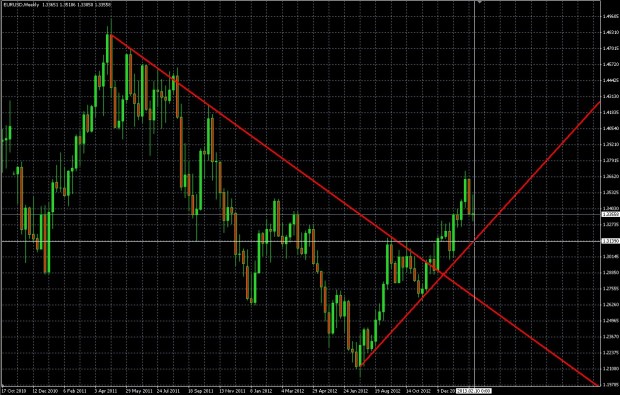 However, as we noted recently here and here, the last 2 times the bellwether S&P 500 was at its decade highs, back in 2000 and 2007, bad things happened to risk assets worldwide. Longer term, both stocks, and especially the EURUSD, remain in secular bear mode.

As for the likely top market movers for the coming week, they’re mostly variations on one of the above big three medium term market movers.

The statement essentially gave a green light to further JPY devaluation, which boosts Japanese stocks, and risk appetite in general.

We discussed these here. In sum, the uncertainty they present is bearish for the pair. They include elections in Cyprus (February 17th) and Italy (February 24-5). Both could produce results that would complicate reforms that markets want to see. Until the uncertainty is resolved, these exert a bearish influence.

3. US Sequester Threat (Austerity Threat) Complacency: Bullish For The Pair

Thus far markets aren’t worried, but thousands of US government workers could be furloughed without pay if this isn’t avoided before the March 1st deadline. So the prevailing complacency is bullish for risk appetite and thus for the EURUSD. If there’s no resolution as March 1st approaches, that could change. By now, however, markets are used to last minute deals in Washington

As we discussed in part 2 of our post on last week’s lessons for this week,

4. Calendar Events: Bearish For The Pair

We covered these here. Data from the EU outside of Germany has not been good, and for the US it’s been mixed at best.

One Sure Thing: Diversify Your Currency Exposure

The Fed is actively debasing the USD via QE 3, and the ECB is committed to doing the same through its promise of the OMT. It appears ready to do more still if that’s what’s needed to prevent the defaults that are likely to come in the future given the above troubles for Spain, never mind the rest. Japan is also committed to devaluing the JPY, though like the ECB, so far it’s all just talk. Departing BoE head King was downbeat about the UK’s economy, and the UK on the whole seems ready to do more of its own stimulus and GBP debasing at some point in the future. This past week the WSJ carried a report suggesting the AUD was due for a fall as emerging market growth slowed.

If you’re based in any of the at risk currencies mentioned above, now’s the time to plan to diversify your currency exposure, whether you’re and active trader or passive investor. See here (non-US residents) and here  (US residents)for details on the most up to date collection of a range of safer, less demanding solutions than commonly found in guides to forex or overseas investing.

DISCLOSURE /DISCLAIMER: THE ABOVE IS FOR INFORMATIONAL PURPOSES ONLY, RESPONSIBILITY FOR ALL TRADING OR INVESTING DECISIONS LIES SOLELY WITH THE READER