What we can & can’t tell about the state of global markets, US employment, & how EU’s failed banking deal is already doing damage

The following is a partial summary of the conclusions from the fxempire.com  weekly analysts’ meeting in which we cover the key lessons learned for the coming week and beyond.

–Lessons From The US: State Of US Markets, Employment, & What The Fed Doesn’t Mention About US Jobs

–State Of The Bull Market: Warning  On Using Historical Indicators To Time Markets & Examples of Their Use & Misuse

–Lessons From Europe: How The Failed Bank Union Deal Already Coming Back To Haunt EU

Global Markets: Waiting For The Next Big Thing

Both our technical and fundamental analysis of global market drivers shows that bullish and bearish considerations remain in equilibrium.

Technical Outlook: Virtually every global risk asset market we see, be it a major global stock index or currency, remains within a 12 week trading range. Longer term uptrends are intact but can’t get past nearby long term resistance, be it 1890 on the S&P 500, or 1.39 for the EURUSD

Fundamental Outlook: Similarly, each week’s top tier economic data continues to present mixed results that do nothing to change the prevailing consensus about the various big economies that drive global growth. For example:

–In the US, slow recovery.

–In the EU, a patchwork ranging from slow recovery to stagnation

See our posts on the coming week’s market movers and the EURUSD weekly outlook for details.

The short version: Without a material, sustained bullish or bearish change in data from the leading economies, markets are likely to range trade until they get at least one of the following:

Next, we look at specific lessons learned for the coming week and beyond.

Latest On The State Of The Market

Reasons To Be Bullish: Valuations Can Stay High Longer Than The Current Bull Market

Even if traditional measures say stocks are overvalued, or if stocks have had a huge run higher, that doesn’t mean they’ll go down anytime soon.

Per a recent research note from Gluskin Sheff’s David Rosenberg, bear markets don’t happen unless we get one or both of the following:

Rosenberg offered this chart showing 12-month returns in the S&P 500 since 1969, showing that market downturns usually come due to recessions (shaded area). 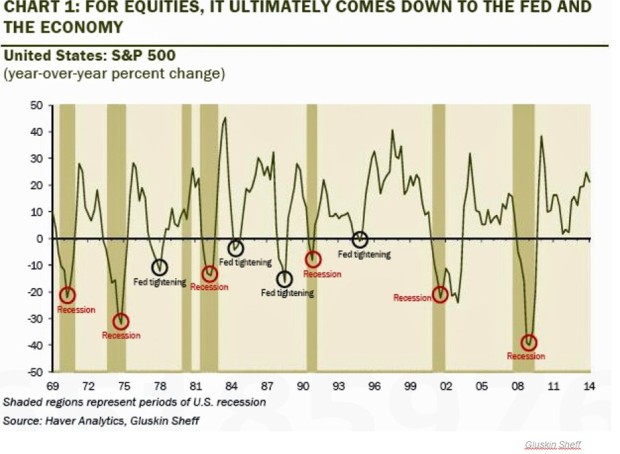 Note also that that 30%-plus rallies over a given 12-months like that seen in 2013, are not uncommon.

The below are two recent bearish indicators. However their bigger lesson is that whenever you see charts of alleged historic stock market crash indicators you (really) need to check the fundamental/historical context.

The indicators themselves are rarely the actual cause of a pullback. Rather, their value is that they provide signal that you may be missing a more logical reason for a coming pullback, and that you need to do some fast investigation to uncover what’s behind these signals and whether it’s a legitimate threat.

Wolf Richter points out that the recent reversal of the multi-year all time high in margin debt that began in August 2012, peaked in February 2014, and reversed by $15 bln in March, is a particularly ominous sign. The last 2 times it happened, markets crashed (simultaneously in 2000, after a few months in 2007).

He suggests this reversal in margin debt after a record move higher is the reason for the dive we’ve already seen in momentum stocks, which in the past two crashes were also the first to go in 2000 and 2007. Similarly, he notes another momentum asset class is looking troubled. Six housing markets where prices were soaring mere months ago are showing plunging sales and soaring inventories. See here for details.

Just looking at March 2007, this was a worthwhile indicator because if you weren’t aware of what was happening with the US sub-prime crisis (it was just starting in earnest) this one might have tipped you off. The Fed could have used the hint. Note how it kept the Fed Funds rate at 5.25% steady through the summer even as the subprime mess was unfolding.

The Federal Home Loan Mortgage Corporation (Freddie Mac) announces that it will no longer buy the most risky subprime mortgages and mortgage-related securities.

The Federal Open Market Committee (FOMC) votes to maintain its target for the federal funds rate at 5.25 percent.

The FOMC votes to maintain its target for the federal funds rate at 5.25 percent.

The Federal Reserve Board announces that it “will provide reserves as necessary…to promote trading in the federal funds market at rates close to the FOMC’s target rate of 5.25 percent. In current circumstances, depository institutions may experience unusual funding needs because of dislocations in money and credit markets. As always, the discount window is available as a source of funding.”

Richard Ross, global technical strategist at Auerbach Grayson notes that the last time this happened, in 2011, stocks fell over 20% back to the 150% weekly moving average.

Why I like This: Occurred During Fed Historical Easing

I include this tidbit because unlike other bearish signals, this one last occurred during the recent era of ultra-easy Fed policy and historically low rates. Thus it appears to counter the claim that as long as benchmark rates stay near zero, cash keeps stocks supported.

Why I Don’t: Massive Context Omission

That said, a 20% pullback is not a crash, and the last one didn’t last long.

Most importantly, and this is the thing that most undermines Ross’s argument; the drop was rather clearly driven by a second round of EU crisis fears. Highlights from the period of that pullback from May to September 2011 include:

Given that nasty bout of EU crisis, and general inexperience with how to handle it, this particular overbought indicator can’t be taken that seriously as it fails to consider the very exceptional fundamental context.

What we can say is that when markets are topping and are 20% over their 150 week EMA, they are especially vulnerable. However in time of historically low rates, even a threatened contagion risk was well contained.

Again, view these timing indicators as mere warnings that something may be developing. We don’t time our entries and exits based on them; however we would use them as signals to investigate the underlying problem that may be causing the smart money to exit.

US Jobs Picture & What The Fed Should Emphasize But Doesn’t

As we discussed in some depth here, an otherwise very bullish set of April US jobs reports was undermined by 2 things.

Per Dan Crawford of the Economic Policy Institute , the headline unemployment rate heavily understates true unemployment, saying if the LFPR were more stable, the unemployment rate would be much higher, closer to 9.9%. Still, the U-6 rate (more inclusive of those discouraged dropouts) also fell along with all other alternative measures of labor underutilization. 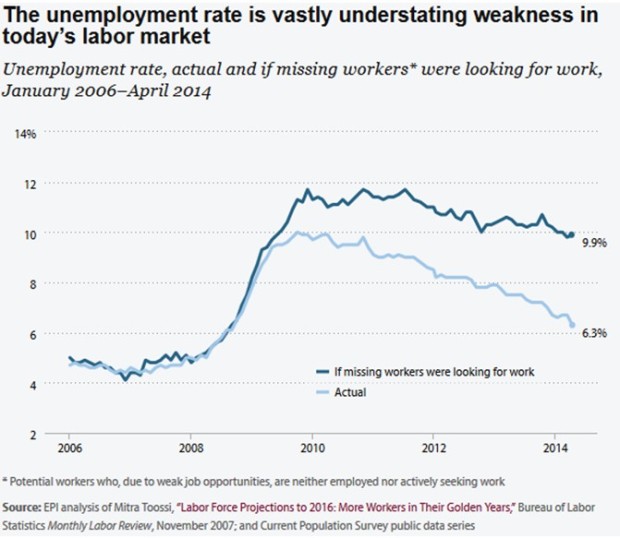 However it’s well known that a key feature of the current recovery is that most of the new jobs don’t pay as well as old ones did. The employed are making as much as they did before the financial crisis. For example:

The National Employment Law Project (NELP), via George Magnus, reports that from February 2010 to 2014, most of the job growth is in lower-wage industries.

Key Points About US Employment

—- How much slack remains in the labor force, see here for details

—- Whether Fed policy can do anything about it, see our special report here for details

–Even if the number of jobs and real employment rates recover, the recovery will be limited to the extent that real wages don’t recover too.  If wages and incomes stay flat, the recovery is likely to remain weak due to lack of domestic spending.

In our past posts we’ve repeatedly warned readers of the dangers of the EU’s failure to agree on a credible banking union. Chief among these is that they would make planned rigorous ECB bank stress tests impossible because if the EU has no credible way of closing or healing undercapitalized banks. That leaves the ECB with yet another set of bad choices (we already discussed its limited options for fighting deflation in our weekly EURUSD outlook):

In short, EU banking remains a ticking bomb strapped to the EU’s chest, and keeps the threat of another EU banking crisis and contagion threat very much alive and well.

Of course that day of reckoning could be years away, or perhaps never arrive, if the ECB is allowed to print Euros as needed.

However this continued failure to provide meaningful guarantees for EU banks, (and thus to prevent a potential crisis from becoming reality as bank depositors, lenders, and shareholders from flee at the first signs of trouble), has more immediate ramifications.

As we discussed in our special report: Fools Russian: 1 Chart Shows How To Play Russia Tension-Related Selloffs, Europe’s dependence on Russian energy and trade virtually assures that it will offer Ukraine little support beyond acts that are mere symbols and sympathy. Otherwise, it’s business as usual.

If you weren’t convinced, consider the combination of EU banking’s

Stay tuned for a coming update to the above “Fools Russian” post for more on the range of Ukraine sanction risks and ramifications for investors.

—Technical & Fundamental Drivers In Near Term Equilibrium & What’s Likely Sources Of New Trends. Meanwhile, global equities, currency, and other markets are range bound within support and resistance of the past 12 weeks. This levels are useful for those with relatively short holding periods.

—Lessons From The US: State Of US Markets, Employment, & What The Fed Doesn’t Mention About US Jobs. We hear little mention of how it weighs income growth, and that is disturbing for a consumer spending-based economy

—State Of The Bull Market: A Warning On Using Historical Indicators To Time Markets & Examples of Their Use & Misuse. Don’t view these as signals to open or close positions, but rather to investigate the underlying real change. If you can’t find it, at least take precautions in case the signal still proves correct.

—Lessons From Europe: How The Failed Bank Union Deal Already Coming Back To Haunt EU, & Ramifications for Ukraine